Home Zuhause: Sex by Violence, the truth behind Trauma

Zuhause: Sex by Violence, the truth behind Trauma 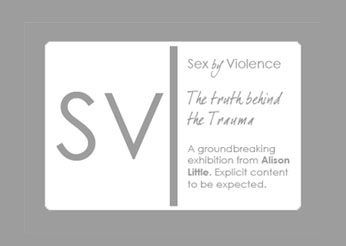 Zuhause: Sex by Violence, the truth behind Trauma

SV, Sex by Violence, the truth behind the Trauma will be taking over the new zuhause Gallery space in Gostins for the first week in July. Explicit content to be expected.

The exhibition comprises of a series of 4 animated sculptures entitled SV, Sex by Violence. The works are a graphic depiction of the act of a woman being raped, each form representing a different stage in the process from the initial act to the recovery. All forms replicate a woman’s lower body and legs, each is made from polythene and shredded paper combined with found object. ‘Invasion’ is an interpretation of a women being violated, The nail which protrudes the groin area represent the woman muscles fighting against the undesired penetration of her body. ‘Coming Too’ highlights the process of the woman recovering from clinical shock as a result of the sex attack. The sea foliage worked through the form illustrates the concept of water flowing through her body. The zig-zag which waves through the body as the brain re-engages with the bodily muscles. ‘Fatigue’ introduces the physical consequences of violation: extreme tiredness and the bodies need to sleep as part of the recovery process. ‘Life from the Waist Down‘ illustrates the beginning of the recovery process, the body and the mind are becoming strong again, the form is upright.

Alison Little is the artist behind the forms, she has been North -West based for the last decade and worked on commissions from the Superlambanana trail to the Penguins. Her conceptual work began to move forward several years ago being exhibited at the Williamson Gallery, Unit 51 in the Baltic Triangle in addition to a commission completed for the equality council in Derby. This is the second show she has Curated, the first ‘Shatter the Silence, Violence against Women’, a group show being held at the Quaker Meeting House in School Lane, Liverpool City City. Alison helps Organise the  Reclaim the Night March held in spring in Liverpool annually. The intentions behind the exhibition as a means of activism against sexual violence and to play its role in her campaign work.

An exhibition which will shock, inform and challenge Rape Culture which is embedded within our society.

Exhibition for one week only, not to be missed:

Private View to be held on: