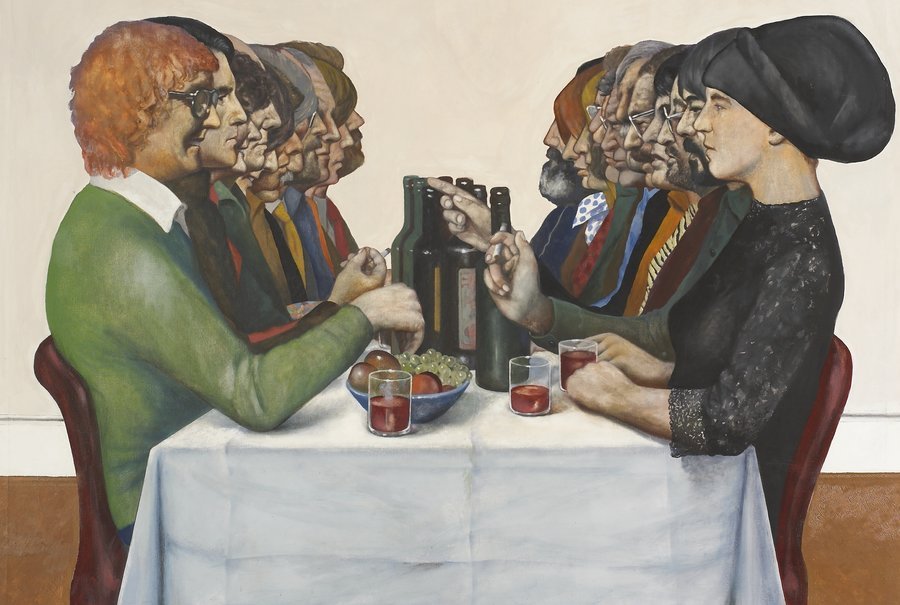 THE DINNER PARTY CELEBRATES THE WORK OF FIVE LIVERPOOL PAINTERS AS INSTIGATORS OF A DISTINCTIVE ART PRACTICE FROM THE EARLY 1960S TO THE LATE 1970S: LOCAL, INTERNATIONAL AND SELDOM METROPOLITAN.

The Dinner Party: Of Time & Place comes to the Williamson Art Gallery in Birkenhead from the 24th of June, looks closely at a slice of Merseyside’s Post-War cultural history.
Sam Walsh’s 1980 painting serves as the fulcrum around which to examine an important part of this world via five of its guests: the painters Don McKinlay, Arthur Ballard, Adrian Henri and Maurice Cockrill and Walsh himself, The exhibition will be the first time in more than a generation that all five artists will have featured in the same show.

Recently gifted to the Walker Art Gallery, The Dinner Party acts as a fulcrum that helps introduce the visitor to members of Walsh’s fictional soirée and their roles in the area’s artistic at that time. The exhibition will also encompass the identity and development of the city’s “bohemian” Liverpool 8, within which the artists were part of a loose knit community, and the nature of the exchange between the artists themselves and their relationship with the city.

Freelance curators, Colin Simpson and Gabriella Warren-Smith, recent Masters graduates in Art History & Curating from Liverpool Hope University came up with the idea for this exhibition during a university assignment. Having devoted much work and research to the project, Gabriella & Colin decided to turn the exhibition into a reality, a process which has taken two years. They have worked with the Williamson Art Gallery’s own Colin Simpson to bring this together.

The exhibition’s research-led narrative has evolved from a stream of informal interviews and meetings with personal friends and family members of the artists as well as collectors of their work.

For more informatio go to www.thedinnerparty.space