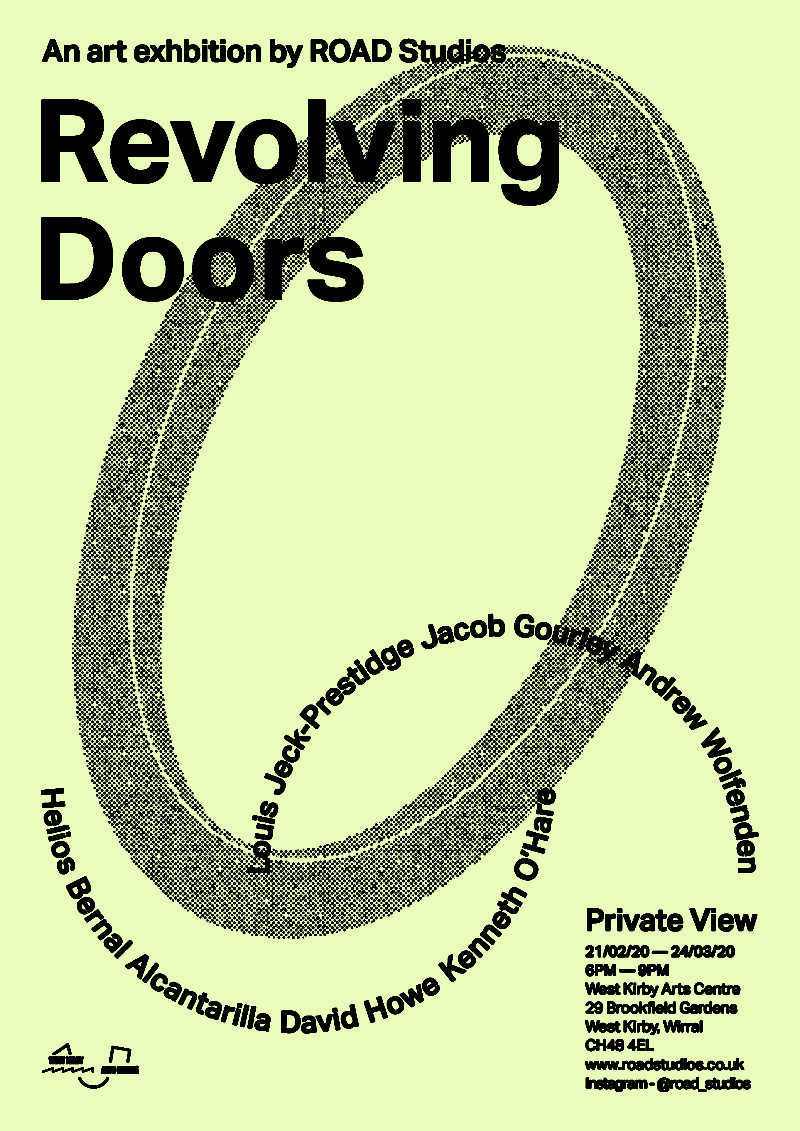 The first of our Revolving Doors double showcase of ROAD Studios members (plus a few special guests) exhibiting in the fantastic location of the West Kirby Arts Centre. Revolving Doors highlights the transitional nature of art studio life, with members coming and going but sharing a common bond to create engaging art that question the society that surrounds us. All the artist selected for this show have a common theme of urbanism running through their work showing the highs and lows of urban living.
Private View: Friday 21st February 6-9pm
Open: Saturday 22nd February – Sunday 23rd March

Jacob Gourley
is a Liverpool based artist, specialising in oil and acrylic painting, graduating with a first class honours degree from the University of Gloucestershire. During his second year of university, he was awarded a scholarship to study for a month in the British School in Rome. This experience, along with trips to Tuscany and The Far East, have hugely shaped his practice, each marking a pivotal moment in his artistic career.

David Howe
An artist and Illustrator living and working in Liverpool, UK. David is known for his charcoal drawings which often have a narrative twist and illustrate the texts that accompany them. His practice also involves documenting the world in this medium, as seen in his charcoal drawings around Chernobyl. David has also been exploring digital painting and drawing using the iPad as his canvas to draw on the go. David has worked with clients such as AON, The Folio Society, HMC coffee in Kuwait and MAGMA in Qatar.

Louis Jeck-Prestidge
Louis appropriates clips from Youtube to produce paintings and digital videos. These clips are ordered and transcribed forming an open-ended narrative. Louis is interested in the way in which the media imitates human behaviour. Thus developing a new form of psychological discourse. Louis details the changes in techniques and attitudes in movie image making. Images are framed within its own temporarily.

Kenneth J O’Hare
Viewing a modern city from afar becomes almost a meditative experience, one hears no noise nor sees no people, buildings stand as megalith structures that tower silently above the horizon, the viewer is confronted by a geometry of horizontal and vertical lines. As technology advances glass has become an integral part of architects’ designs, exploiting its potential to its limits, creating structures where people live and work. Kenneth has experimented in depicting the city by studying the effects of light on glass, how light is reflected or absorbed. Through his work he endeavours to capture the city, its geometric forms and space within, with its facades of glass and geometric shapes, that appear to suspend or fall from the sky, reflecting and absorbing energy and light. In his work, each frame of glass contains a minimalist image in three dimensional space, each frame harmonising with its neighbour, collectively forming a final painting, giving the viewer a meditative and spiritual experience.

Andy Wolfenden
Andrew Wolfenden is a freelance graphic artist and designer from Liverpool. His current practice involves typography, print, editorial and promotional design but he still mixes and experiments with a whole range of different types of media, processes and disciplines. Over the past year he has became conscious of typography around us, in shops, front pages of newspapers and so on and how we perceive it, how every day it tries to provoke a reaction from us. Has incorporated the influence typography has into his own work through the use of font and colour to cause a emotional response in the viewer.