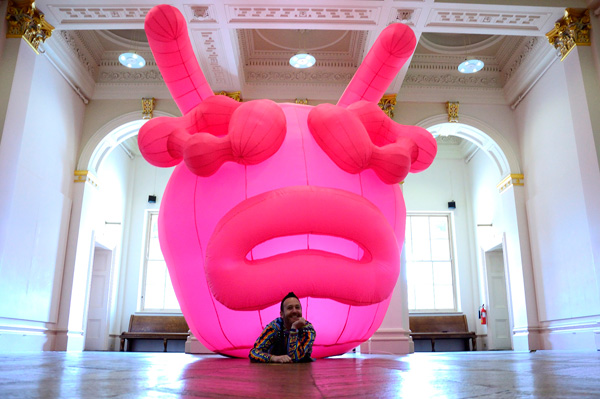 Alien Sex Club is a major multimedia project by British Artist John Walter. It explores the relationship between visual culture and HIV and asks audiences to consider sexual transmission risk in a broader personal and social framework.

Using the spatial device of a cruise maze found in sex clubs and gay saunas, the Alien Sex Club installation at Camp & Furnace brings together sculpture, painting, video, performance and installation to address the complexities of contemporary sexual health. Visitors are immersed in a multisensory world where they are free to adventure, have their fortunes read by the tarot reader or share conversations over a drink at the gin bar.

Through the aesthetic of carnival and festivals Alien Sex Club introduces serious issues to a wide audience in an accessible, playful and provocative way. The project is part of John Walter’s PhD research and is the result of a collaboration with Dr Alison Rodger, Senior Lecturer and Honorary Consultant in Infectious Diseases and HIV at University College London supported by a Small Arts Award by the Wellcome Trust.

Continuing Homotopia’s long-standing partnership with National Museums Liverpool, throughout the festival John Walter’s inflatable sculpture ‘Pug Virus’ will be exhibited at the Walker Art Gallery. The four metre-high inflatable head is sewn in pink ripstop nylon and is based on one of a series of 3D printed ‘virus heads’ that Walter has made. ‘Pug Virus’ is Walter’s attempt to re-envision HIV in our current era of highly effective antiretroviral therapy, in contrast to representations of the virus during the ‘AIDS’ crisis in the 1980s. It fills the elegant space of the neo-classical Walker Art Gallery in a bold and uncompromising way. Visitors will then be signposted to the full exhibition at Camp & Furnace.

Also as part of Homotopia, at the Bluecoat, Walker Art Gallery and at Camp & Furnace, Alien Sex Club will present a free public programme of associated talks and events from artists, activists and health professionals aimed at providing audiences with a new vocabulary for understanding and talking about HIV and the factors contributing to its transmission.

Tues 1 December -World Aids Day – 11 – 5pm, Tarot Readings by Barbara Truvada, Walker Art Gallery. The Alien Sex Club tarot deck gathers together images that allow reader and visitor to discuss subjects including sexuality and cultural transmission. Walter’s set contains 78 cards, with a Higher Arcana of 22 picture cards and four suits – the Bugchasers, the Giftgivers, the Barebackers and the Serosorters – which draw on the mythology of HIV. The tarot reader’s name refers to Truvada® the brand name of a type of Pre-Exposure Prophylaxis (PrEP).

Background and context for the project

During the early AIDS crisis of the 1980s and 1990s, many public sex environments (often including cruise mazes) were closed by law. More recently, cruising for sex has moved online with apps such as Grindr, Scruff and Hornet gaining in popularity. However, many men still want to meet in person and anonymously for sex, despite the risks involved.

Gay men remain one of the groups most at risk of HIV in the UK, with 3,250 new cases of the infection diagnosed in this group in 2013. Anti‐retroviral therapy (ART) helps HIV‐positive patients stay healthy with near normal life expectancy but the long‐term physical effects of ART are still unknown and its long‐term cost is of increasing concern. It is estimated that ART costs around £500,000 per person for a lifetime of treatment.

Popular debate around the medical and social implications of ART and HIV in this country is set to increase in the next year, as pre‐exposure prophylaxis (PrEP) and self‐testing for HIV will become more available in the UK, changing how people think about risk and unprotected sex.