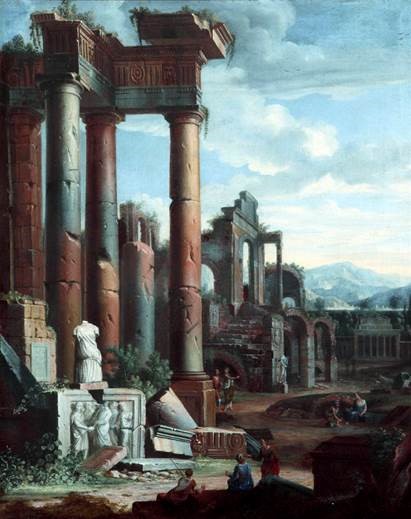 The Art of Ruin
Location: Along the Balcony Wall, first floor

The Art of Ruin
There are strands of Italian landscape painting which celebrate the ruinous and crumbling. It was a taste that emerged in Rome in the mid-1600s when visiting archaeological sites and collecting ancient artefacts became popular.

There are two main types of ‘ruin’ paintings. In capriccio, real or fantasy architectural structures are placed in a fictional landscape. While the closely allied vedute ideate sets identifiable buildings in romanticised or exaggerated settings.
The figures and animals which appear in the foreground are known as staffage. They help give scale to the composition and can be humorous or comment on the scene though their actions.

During the 1700s wealthy visitors undertaking the ‘Grand Tour’ around Europe’s famous landmarks such as Venice and Rome would often buy capriccio and vedute ideate as souvenirs. In Britain it became fashionable to hang them over doorways, as though it was a threshold into the landscape itself.

Definitions:
Capriccio means capricious or a caprice. It is said to derive from the Italian word ‘capra’ meaning goat, pertaining to something that acts in unexpected ways.
Vedute ideate means imaginary views.