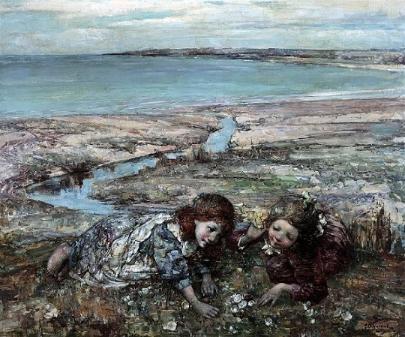 A New Beauty – Romanticism in Art 1880 – 1920
A display exploring the evolving ways that physical attractiveness was depicted from the late 1800s.

New ways of depicting beauty evolved during the late 1800s, influenced by later Pre-Raphaelite artists like Edward Coley Burne-Jones. The harshness and moralising of Victorian academic painting was rejected in favour of ‘art for arts sake’ embracing the purely decorative. This phase came to be known as the Aesthetic Movement, which mixed visual influences from classical antiquity, Japanese culture and the European Art Nouveau. Alongside, the school of New Sculpture emphasised naturalistic poses and emotions using the sinuous, graceful lines seen in Art Nouveau.

Yet, while women were being depicted as delicate and otherworldly creatures in art, real women were beginning to demand emancipation and equal voting rights. The press labelled them as ‘the New Woman’. James Hamilton Hay’s portraits of some of his female friends represent their new independent spirit as Britain moved into the Twentieth Century.