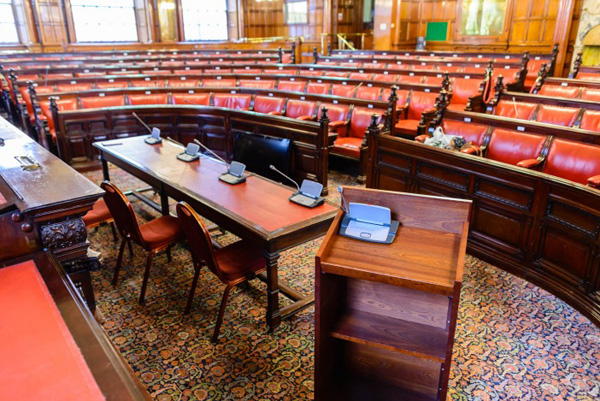 Come and join the open jury consultation in the form of a temporary parliament that will decide who is awarded the 2015 Visible Award.

The curators of the Visible Project, Matteo Lucchetti and Judith Wielander, Tate Liverpool’s Artistic Director, Francesco Manacorda with the advocate Dr Andrea Philipps and members of the jury will lead an open public debate in the Council Chamber in Liverpool Town Hall – a perfect setting for a public ‘parliamentary’ debate and then cast your vote!

The prize of 25,000 euros will be awarded at the end of the debate and the session will end with a video call with the winner.

The Visible Award will be hosted by Tate Liverpool in 2015. Visible is the first European award for socially engaged artistic practice, celebrating art projects that work with people in the social sphere across the world. From Monday 26 October, for the week leading up to the public jury session, Tate Liverpool will host a free display of the nine shortlisted projects, each represented by a video in the foyer.

With thanks to Liverpool Town Hall.
Visible is a project undertaken by Cittadellarte – Fondazione Pistoletto in collaboration with Fondazione Zegna, curated by Matteo Lucchetti and Judith Wielander.
This event is related to the exhibition 2015 Visible Award: Shortlisted Projects