The Arts Centre EHU: The Fall 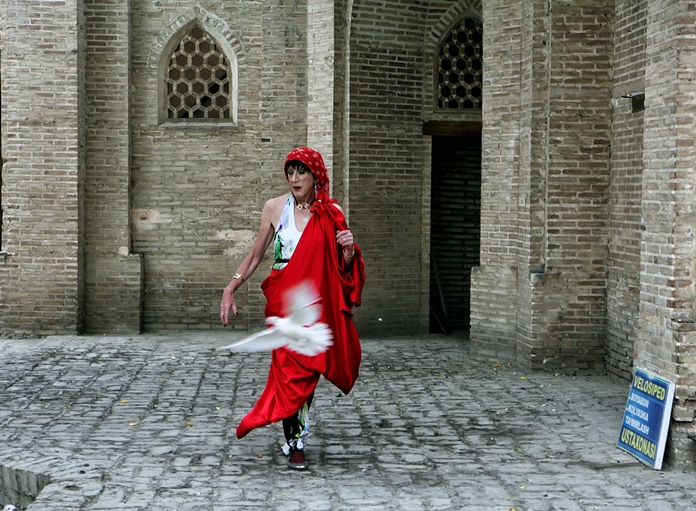 The Arts Centre EHU: The Fall

The moment a fall into the sea nearly ended a cultural adventure is brought into focus in a multi-media installation, “The Fall”, at the Arts Centre at Edge Hill University in March. Liverpool-based artist and writer Roger Hill was nearing the end of a journey along the great Silk Road route across Asia in 2017 when a safety failure on a ferry in Baku led him to near-drowning in the Caspian Sea.

Roger had gathered a wealth of cultural material along his trans-continental journey from China to the Caspian and uses it, in association with sound-artist Andrew PM Hunt and video producer Danny Kilbride, to give some meaning to his experience in a specially installed space at The Arts Centre.

“I felt that there was some connection between all the spaces I had encountered along the way – landscapes, mosques, cities, expo’s, “ says Hill, “and the narrow space into which I fell that night. It was though an experience which realized some of my deepest childhood fears.” The story of his progress, and eventual rescue, is the main strand of the presentation, but audiences to “The Fall” will find themselves surrounded by the sights and sounds of Asia as Roger’s story unfolds.

The installation will be in the Arts Centre from 1st of March alongside a photographic exhibition by Roger’s transgender “other”, Mandy Romero, called “Strange Places and How to Survive” which is a record of her transgender progress through the often illiberal republics of Central Asia.

He has taught Live Art practice area for Liverpool Hope University and the Royal Scottish Academy. His own Live Art work, as the performance “other”, Mandy Romero, has progressed through a number of projects and positions as Associate Live Artist at the Liverpool Bluecoat Arts Centre, an Arts Council Fellowship in Live Art based at the Cable Factory in Helsinki, a commission as part of the “Cities in Transition” programme in Liverpool, and work with Tate Liverpool. In 2007 he spent two months in China carrying out Live Art performance research in the Pearl River Delta and Shanghai.

More recently he has been working with schools on creativity projects and running a very successful Story-Telling Course whilst his own creative work includes producing several short films. His “Et In Arcadia Ego” sequence of autobiographical performance-works as Mandy Romero began in 2010 with “Stevenage”, which toured until 2013, continued with “In Excelsis – A Personal History of Glam Rock” , and in 2015, based on Roger’s 1990’s Liverpool period, “Scandinavia Has Been Good To Me”. “Consolation”, a show commissioned in 2016 by the Cockpit Theatre in London was performed recently at The Arts Centre. Meanwhile his film based on his journal of his first years in Liverpool at Eric’s Club, “Punk Snow”, was premiered in the Spring of 2015, and is now online. Roger continues to update his diary on a daily basis – it currently covers the period from 1972 and consists of more than two million words. He is currently involved in several projects for the Bluecoat where he runs the regular story-telling group.

Andrew PM Hunt is a multi-instrumentalist and sound artist based in the North West of England whose creative work encompasses songwriting, arrangement, audio production and sound design.
As a singer and primary songwriter in art-rock band Outfit (Double Denim, Memphis Industries), he co-produced two critically acclaimed LPs which fused traditional songwriting with an evocative and detail driven experimental approach.
As a solo artist under the name Dialect he has produced three LPs of emotive and innovative electro-acoustic music.

Hunt also works as a freelance AV technician and has been responsible for delivering high quality digital media installation for various different arts institutions including the Barbican, Liverpool Biennial, FACT Liverpool and the Bluecoat, often designing bespoke solutions for challenging installations and amassing a wide variety of related skills.