Home The Arts Centre EHU: Strange Lands And How To Survive

The Arts Centre EHU: Strange Lands And How To Survive 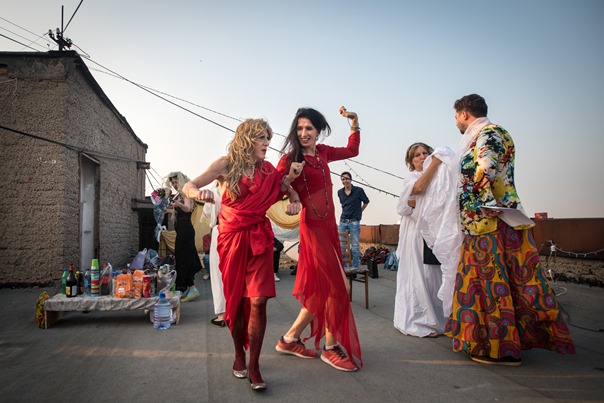 The Arts Centre EHU: Strange Lands And How To Survive

STRANGE LANDS AND HOW TO SURVIVE

Trans-Asian Photos On Show in Ormskirk

The story of a remarkable journey of risk and adventure is captured in photographs in an exhibition, “Strange Places And How To Survive”, at Edge Hill University’s Arts Centre throughout March. When transgender artist Mandy Romero set off to cross Asia from China to Turkmenistan in the summer of 2017 she was determined to bring back a visual record of her encounters in some of the most illiberal and intolerant regimes in the Northern Hemisphere.

Travelling with a large square of red silk as her main costume resource, to signify both the communist origins of the countries en route and the Silk Road route she was following she brought back to the UK a set of portraits of herself taken by a fascinating variety of photographers, most of them met for the first time along the way.

The portraits include location shots from China, Kazakhstan, Kyrgyzstan, Tajikistan, Uzbekistan and Turkmenistan. In all of these countries transgender is unrecognized and often threatened by legislation and attitudes which outlaw LGBT individuals, with sanctions that range from imprisonment to sterilization. Despite this situation many of the shots reveal Mandy made welcome by local people in her photoshoots.

The exhibition shows the images in the context of each country’s history and politics. Mandy Romero, otherwise the transgender “other” of broadcaster Roger Hill, has provided an account of the journey and the characters encountered. A parallel art-work, a sound-and image installation called “The Fall” produced by Roger Hill with Andy Hunt, which explores the sacred and secular spaces of Central Asia, opens at the same time in the Arts Centre.

Mandy Romero is a transgender artist, a created identity but not a conventional alter ego. The artist has produced films, writing and has performed in plays and cabaret but her main performance focus is on Live Art actions and interactions, which she has carried out in places as diverse as Barcelona, Shanghai, Copenhagen and the Pearl River Delta. She is based in Liverpool and has had a long association with the Bluecoat Arts Centre there, producing many of her art-works for them. She took on the mantle of Queen Of Culture for the Liverpool ’08 Capital Of Culture celebrations. Since 2010 she has produced a number of solo performances based on autobiographical material, including “Stevenage”, and “Scandinavia Has Been Good To Me”, both  premiered at The Bluecoat, and “Consolation no 3” recently performed at The Arts Centre, Edge Hill University. Mandy publishes a regular blog in the online publication, Transgender Universe.