Tate Liverpool: Memories of the Future 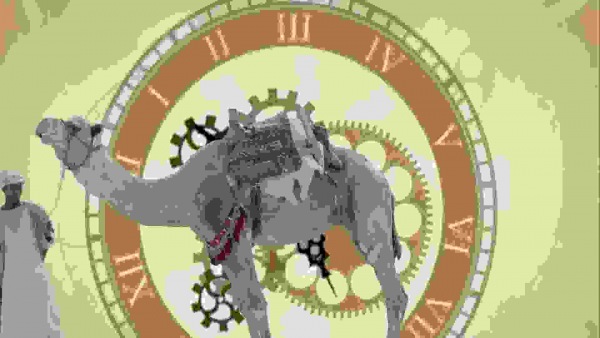 Tate Liverpool: Memories of the Future

See a selection of artists’ films that reverberate with the past, present and at times, also speculating on notions of the future

These works – which range from a futuristic sci-fi to extensive use of archival materials to reflect on imagined moments – offer diverse portrayals of our shared fascination with what was and what might have been, as well as times and events still to come.

Sophia Al Maria’s time-travelling alter ego SFW (Sci-fi Wahabi) makes pilgrimages to desert petroglyphs and other sites of ancient human history in Namibia, Oman and Australia. Her work The Future Was Desert (Part I & II) 2016 considers those who have inhabited the Earth since it came into existence. The films create a dystopic image of the future of human civilization, with Part I beginning with the Sumerian proverb ‘mankind’s days are numbered, all their activities will be nothing but wind’.  In this light, Al Maria presents the desert as a time machine, a future dream, and relates it to Tatooine, the harsh fictional desert planet that is a lawless place which serves as the setting for many key scenes throughout the Star Wars saga.

What is an archive if not a collection of letters to ourselves? A lyrical collage of documentary sound and image gathered from both BBC archives and the School Of Scottish Studies, Depositions reflects critically on British television’s representations of Scottish Highland and Island life. Contemporary footage jostles with the washed-out, saturated tones and blurred edges of archival material, serving to highlight our nostalgia for ancient folkways, traditional song and the romance of freedom. This is undercut by scientific rationalism and the pressures of modernity bringing law to bear on lives resistant to conformity. Within Depositions, Fowler notes ‘the denigration and extinction of both a way of seeing the world and a way of life that was traditional Scottish culture’.

In this film Mikhail Karikis orchestrates a children’s ‘take over’ of an uninhabited workers’ village in Italy that was built around the world’s first geothermal power plant. Across three chapters of the film, the children respond to their surroundings through song, readings – and finally – through unadulterated play and laughter, as they storm into the deserted village. The children’s speculative and playful interventions and their concert with their natural and industrial surroundings generate the opportunity for individual and communal expression, challenging narratives of a failed human project, evoking different possible, desired or imagined futures.

Kiwanga’s film The Sun Ra Repatriation Project 2009 fashions a system of interplanetary communication to return Sun Ra – the American jazz composer, poet and a pioneer of Afrofuturism, who proclaimed his extra-terrestrial origin – ‘home’ to Saturn. Kiwanga travels to the United States and France to meet experts and scientists to help in the endeavour. France’s national police create a composite portrait from video testimonies of those who knew Sun Ra; the composite sketch is then sent into deep space on May 16, 2009.