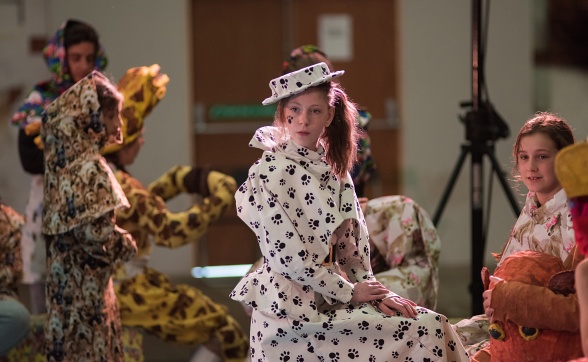 Enter the ‘razzy’ world of Dogsy Ma Bone, Marvin Gaye Chetwynd’s spectacular production made with and for children, at Tate Modern, London this summer as part of the Tate Exchange programme.

There will be a live performance of the piece by the original Dogsy cast on Saturday 24 June with the film installation on view daily between Wednesday 21 June and Sunday 25 June. The latter will be shown in Chetwynd’s small purpose-built cinema, surrounded by hand-made animal costumes and props. There will also be an afternoon of free family activities on Sunday 25 June, 2 – 5pm (drop-in).

Chetwynd’s film and performance – commissioned by Liverpool Biennial 2016 – was created with 78 Liverpool-based young people using the city as a backdrop to the action. The work was inspired by Bertolt Brecht’s Threepenny Opera (1928) and Betty Boop’s A Song A Day (1936) and was first shown at Cains Brewery.

Tate Exchange is an annual programme at Tate Modern, London that brings together international artists, more than 50 partners within and beyond the arts, and visitors.