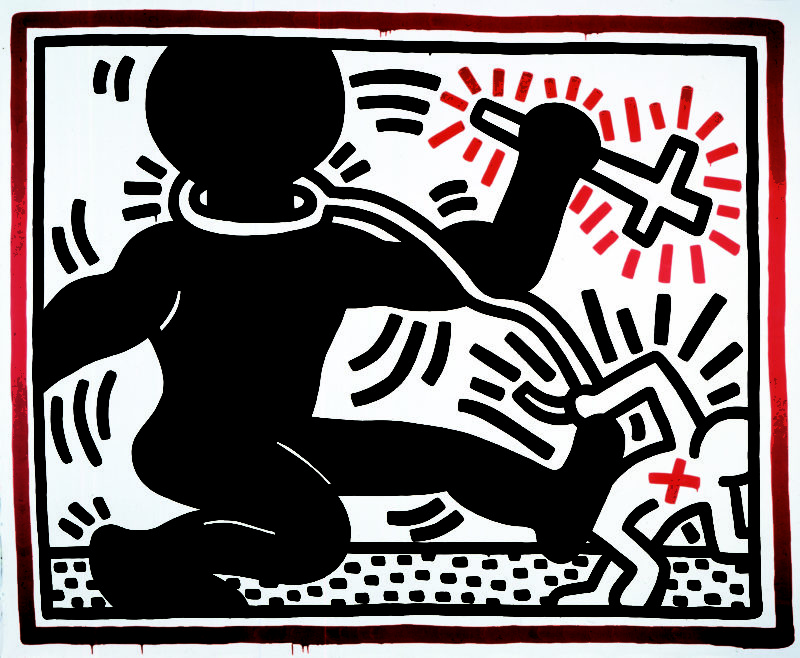 Tate Liverpool presents the first institutional, solo exhibition in the UK of American artist Keith Haring (1958–1990). Haring emerged as part of the legendary New York art scene of the early 1980s, becoming known for his political activism and collaborative approach as well as his iconic visual language.  He played a key role in his generation’s counterculture taking inspiration from street and pop art, as well as underground club culture to make work with motifs such as barking dogs and radiant babies outlined in bold colours.

Bringing together some 70 works including large-scale drawings and paintings complemented by archival documents, flyers, posters, video and photographs, the exhibition evokes the vibrant energy of 1980s New York art and street culture that Haring embraced and reflected.

Haring’s work expressed universal concepts of birth, death, love, sex, war, and compassion to create an immediately recognisable style. Growing up against the backdrop of the space race and the protest movements of the 1960s, optimism and activism played important roles in his art. The exhibition explores Haring as both activist and modern artist of the video age creating and distributing politically viral and often subversive imagery in a direct way to reach the widest possible audience.

Compelled to speak for his generation, Haring’s work responds to issues including political dictatorship, homophobia, nuclear war, drug addiction, AIDS awareness, racism, excesses of capitalism and environmental degradation. Highlights include his famous chalk drawings created on blank advertising spaces on the New York subway, paintings responding to the AIDS-epidemic, works made using unconventional materials such as tarpaulin, as well as rarely seen large-scale drawings. These works are testament to his belief in the social responsibility of the artist and his determination to devote his career to creating truly public art.

The exhibition shows how he was influenced by the immediacy and raw expression of painters such as Jean Dubuffet who coined the term ‘art brut’ to describe art, such as graffiti, made outside the academic tradition. He also collaborated with artists including Andy Warhol and Jean-Michel Basquiat, who shared his concern with unifying the realms of high art and popular culture. Haring expanded on these legacies and influences to create a singular style animated by the energies of his era; from space travel and robotics to video games and hip hop.

A unique presence in 1980s New York, his career was brief, and on 16 February 1990 he died of AIDS-related complications at the age of 31. This extensive exhibition celebrates Haring’s diverse and influential practice and will be accompanied by an illustrated catalogue containing new scholarship, commissioned texts and insights into Haring’s continued relevance for contemporary audiences.

The exhibition is curated by Darren Pih, Exhibitions & Displays Curator and Tamar Hemmes, Assistant Curator, Tate Liverpool. It is realised in collaboration with Tate Liverpool, the Keith Haring Foundation and in partnership with BOZAR, Centre for Fine Arts Brussels where it will be on view from 5 December 2019 to 19 April 2020.