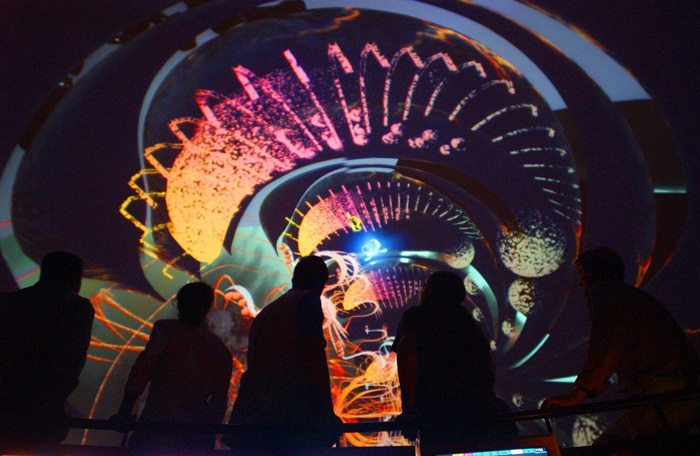 Jellyfishmoon will present Audio Sonic Vision, a 360° Full Dome Cinema Experience at the prestigious Liverpool landmark from 27th to 30th May 2016.

Taking place inside a dome which will be positioned at The Plateau, Audio Sonic Vision is presented in a planetarium style format, in a 10m dome using spherical mirror projection.

The experience will engage the audience with an illusion of movement and a feeling of being ‘within’ the project.

Sound is to be visually represented and projected around the dome. The soundtrack has been created by The Constellation Collective and is their audio interpretation of a 3D digitally animated film featuring geometric shapes.

The idea was the brainchild of Liverpool creative start-up company Jellyfishmoon which comprises co-producers Justine Shannon and Joe Wilkinson.

Joe explained: “We have been working towards this project since January 2015, after visiting the Royal Observatory and watching Dark Universe. This experience inspired us to create a fusion of this full dome presentation but adding sound specific to the picture.

“Our activity is to create a mobile, fully immersive audio visual experience that will involve the audience feeling illusions of movement.”

Justine and Joe have devoted a lot of time, energy and money into turning their ideas into reality. They travelled to Poland to purchase a 10m dome from the leading suppliers after lengthy research into the structures and have secured a grant from Arts Council England.

Joe added: “We will correlate the images being show in a planetarium style format, with a sound specific musical accompaniment. By employing a relatively new technique, developed by Professor Paul Bourke, this activity is made possible by the dramatic drop in cost in full dome projection, yet does not compromise on quality.

“After many hours researching full dome productions, we decided on the American Museum of Natural History’s acclaimed digitally animated production SonicVision. This film consists of flying fractals and geometric shapes which will be intriguing and appealing to all.

“We have created a soundtrack scored to the film that will be an undeniable representation of the images being shown and have enlisted the Constellations Collective to do so. Their diverse backgrounds will give a wide interpretation and be moving and intense at times. Drawing on elements of folk, electronica, punk indie and soul it will be unique in its composition.

“We will show a piece of art which delves into peoples’ consciousness and asks them questions about their relationships between sound, light movement and the geometry seen all around.

“By staging this activity, we want to engage the public, new to the arts and regular engagers, by showing them multiple factions of it, in a seemingly alive production that will leave them to go in search of the arts in the future.”

Jellyfishmoon are hoping this project will open up avenues for them to collaborate with different artists and organisations in the future and are planning a trip to Iceland to show their audio visual production. Plus, there are more exciting projects in the pipeline…

Joe revealed: “We have developed artistically during this project and due to the very nature of the idea for this activity, it has lead us to discussions with the National Space Centre, who have agreed to partner with us in a future project.”

St George’s Hall Manager, Alan Smith said: “St George’s Hall is excited to be working with such an innovative company as Jellyfishmoon to host this groundbreaking event. We challenge you to come and be ‘moved’ by this unique full dome projection which promises to be a real feast for the senses.”

The experience is a standing event containing flashing images and loud music, with wheelchair access, suitable for children aged 8+ (at parents’ discretion).

Each performance is approximately 26 mins long and they run hourly from 11am with the last showing at 8pm.
Tickets are priced £2 per person with family tickets available for £6 (admits four). Tickets are available from the Heritage Centre Gift Shop at St George’s Hall and can be purchased on the day. Contact The Heritage gift shop on 0151 255 6903. 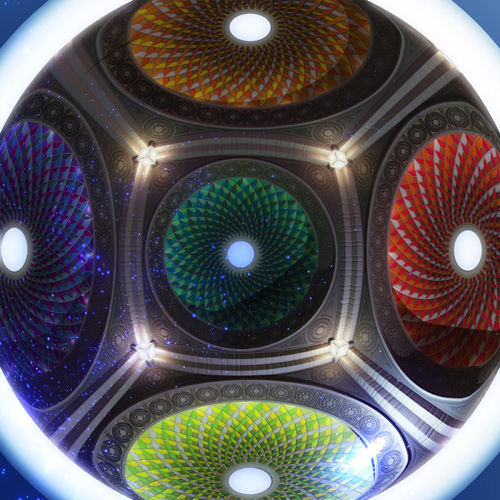