Savera UK: Talking FGM: An afternoon with Ifrah Ahmed, the “Girl from Mogadishu” 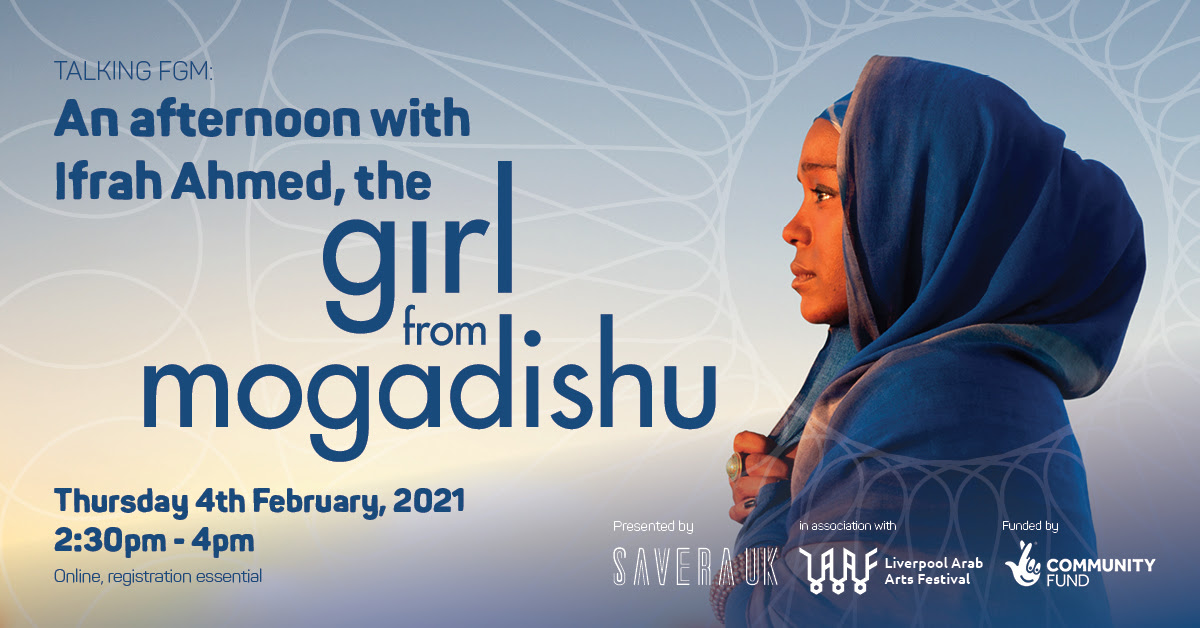 Savera UK: Talking FGM: An afternoon with Ifrah Ahmed, the “Girl from Mogadishu”

Talking FGM: An afternoon with Ifrah Ahmed, the “Girl from Mogadishu”
Presented by Savera UK in association with LAAF

To highlight the UN’s International Day of Zero Tolerance for Female Genital Mutilation, Savera UK will join forces with Liverpool Arab Arts Festival (LAAF) and Together Films, to host an online panel event discussing the Pembridge Pictures film A Girl From Mogadishu, directed by Mary McGuckian, as well as highlighting the wider issues around FGM and gender-based violence.

Winner of the Cinema for Peace Women’s Empowerment Award at the 2020 Berlin Film Festival, this powerful and inspiring film is based on the true story of global gender based violence activist, Ifrah Ahmed, who will join Mary McGuckian, Savera UK’s Afrah Qassim and LAAF’s Professor Anahid Kassabian for the event. The event will be chaired by Savera UK Patron and former Chief Crown Prosecutor for North West England, Nazir Azfal OBE.

Fleeing war-torn Somalia in 2006 for the United States, Ifrah is trafficked to Dublin, Ireland where she applies for asylum. A traumatic medical examination reveals the extent of her mutilation as a child. Traumatised by the memory, she channels the experience into a force for change and emerges as a formidable campaigner against Female Genital Mutilation at the highest political echelons in Ireland, Europe and globally.

Starring Aja Naomi King (How to Get Away with Murder) as Ifrah Ahmed and Barkhad Abdi (Captain Phillips) along with Orla Brady (Picard, Rose Plays Julie) and Somali icon, Maryam Mursal the film boasts an original score by Nitin Sawhney and its title track also features Quiet by Milck, the unofficial anthem of the 2017 USA Women’s March. Based on the recorded testimony of activist Ifrah Ahmed, it is written and directed by Mary McGuckian.

A screening link to the film will be provided to all registrants, so they can watch the film ahead of the panel event (Thursday 4th February, 2:30pm). This link will be available until Saturday 6th February 2021.

Proceeds from sales of tickets for the event will be split between Savera UK and Together Films. Learn more about the event panel below or click here to book your ticket.