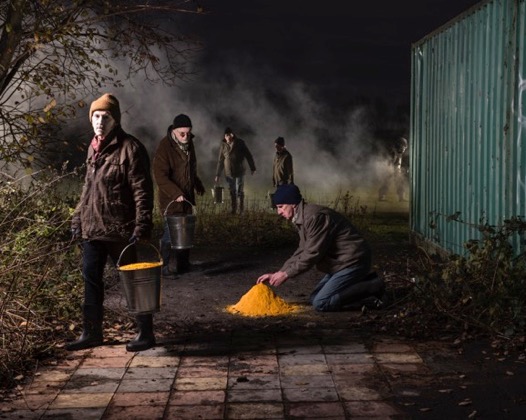 Where Things Are Different

Sankey Canal (behind The World of Glass)

Heart of Glass, supported by Open Eye Gallery, Liverpool has commissioned Where Things Are Different, a new major artwork by photographer Stephen King exploring the connections between the many varied industries – glass, chemicals and mining – that have defined St Helens and their workforces. Launching St Helens 150, a vibrant programme of cultural events and activities in partnership with St Helens Council to mark the borough’s 150th anniversary of receiving its Royal Charter, King’s six large-scale photographs in lightboxes will be installed on the banks of the Sankey Canal, behind World of Glass, reflecting the very heart of the town’s past industries.

King has collaborated with workers from St Helens post-industrial communities to unearth the shared experiences that exist within these displaced workforces. The resulting work is a series of incredibly beautiful and surreal images that articulate the enduring memories of the events and encounters created by people’s working lives in some of St Helens most recognisable industries.

Where Things Are Different is a project that attempts to place equal credence between the logic of fiction and the logic of fact within the context of community. King attempts to illustrate overlapping anecdotal fragments from close-knit St Helens communities and the tall-tales that emanate from the shop-floor. Focusing upon the experiences that aren’t documented in the form of books or curated in museums, but ones that only exist upon the lips of the people, he asks the question ‘What remains once a sizeable workforce vacates a site after many years of service?’ King explores the notion that places now take up space within the social experience as well as the memories, stories and folklore held by a community.

Stephen King says of the whole process of making Where Things Are Different: “I’m sure that some of the stories told to me are historically factual, but I’m also sure that the foundations of some are built on sand! That is the nature of an anecdote; it’s usually passed on. These tales from the shop floor or of childhood events are generally remembered and retold through a filter, dependent on where or to whom it’s being told. The fact that a story is being told and shared is enough for me, it has already created a new place of its own.”