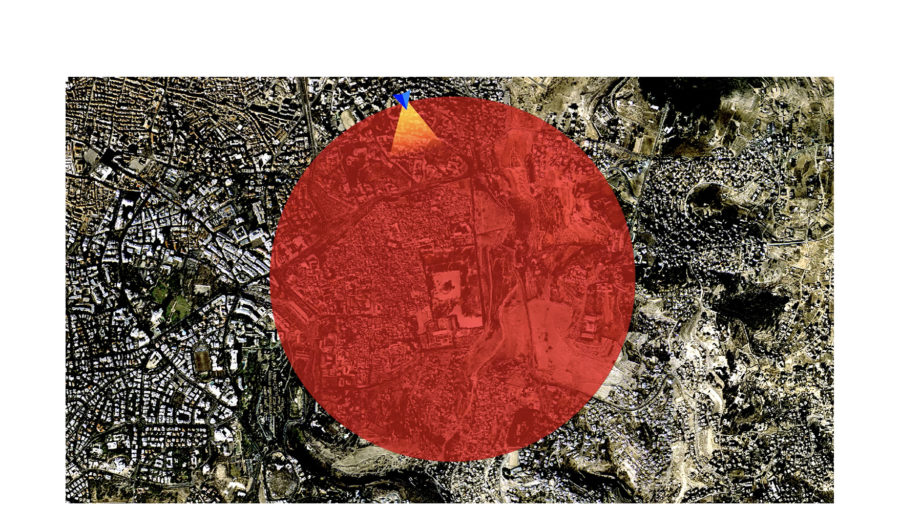 How do we visualise power? What does it look like, and for whom is it visible? Launching on 16th January 2020, Open Eye Gallery’s new exhibition Visual Rights looks at how images can expose uneven distributions of power, and shape the way we understand a place’s geography.

From early attempts at mapping the world, to modern satellite imagery, territories – and people’s right to inhabit them – have continually been established and redrawn, contested or removed. This process often becomes concentrated in areas of conflict and geographical contest: in recent history, this has included Ireland, Kashmir and Ukraine. Curated by Gary Bratchford, a photographer and sociologist, Visual Rights presents work from artists in Israel, Palestine and the UK to examine this process.

Visual Rights brings together different methods of revealing how power subtly operates and affects the fabric of everyday life. The perspectives include surveying underground water pipelines that allow non-native plant life to flourish, photographing areas that have their electricity supply cut off at night, and the view from drones — a view that has become synonymous with modern conflict.

Tarek Al-Ghoussein was born in Kuwait. Despite having Palestinian parents, he is unable to visit the country. His works show fading barriers and lines drawn in the desert, many of which feature a green mesh material used to mark out the land. For Tarek, these barriers in the desert refer to the ‘Green Line’, a border established in 1967 to mark out the border between Israel and Palestine. Throughout the years, this border has been contested, crossed and pushed back.

In Garden State, UK artist Corinne Silva considers how gardening, like mapping, is a way of dividing and allocating territory. Over three years Silva travelled across Israel/Palestine, making photographs of public and private gardens in twenty-two Israeli housing settlements. The clusters of images in the wall installation plot out the suburban gardens spreading from the Mediterranean Sea to the River Jordan that each contribute to the reshaping and renaming of these contested lands. The viewer is left to imagine what lies beneath and between.

Yazan Khalili lives and works in and out of Palestine. His work uncovers the power dynamics and hidden politics at play within technology, landscape and institutions. His background in architecture allows him to look at landscape in a critical manner, deconstructing colonial visual discourse around Palestinian landscape. In 2002, he became stuck in the town of Birzeit for several weeks due to restrictions on his movement from Israeli government curfews. During this time, the town experienced power cuts, throwing the area into darkness and highlighting the towns across the border in the distance that still have power: Khalili captures these dark landscapes using long-exposure photography, naming each image after the camera settings used to achieve it.

Miki Kratsman and Shabtai Pinchevsky are photographers working in Israel. Anti – Mapping is an ongoing project with the aim to continuously create maps as alternatives to the maps presented by the establishment, and thus avoiding the restrictions of visibility given by the Israeli government – 2.5 meter per pixel (as opposed to 0.5m worldwide). Our goal is to provide the opportunity to see. The maps shows places that disappeared from the official maps like the “Unrecognized Bedouins Villages”, the “1948 Palestinian Villages” and other places that has no presence in online and offline maps. Khan al-Ahmar is one case out of many that has been documented in the project.

Hagit Keysar’s Restricted Zone: Temple Mount, co-created with Barak Brinker, tests technological and civilian restrictions over the aerial space in Jerusalem. A no-fly zone (NFZ) surrounds Temple Mount, or al-Aqsa, a site that has become the heart of a religious and political conflict. A technological barrier (geofence) coded into the flight interface of drones manufactured by the Chinese company DJI, prevents them from taking off or passing through the area. The material existence of this restricted zone is revealed through making its invisible boundaries seen — by flying a drone equipped with a camera around its perimeter. In doing so, Keysar and co-creator Barak Brinker reveal invisible walls, exposing how political, theological and technological power systems overlap and reinforce each other.

Another project by Hagit Keysar, A Civic View From Above, also takes to the skies to examine power struggles on the ground. Keysar collaboratively uses a technique of ‘Do-It-Yourself aerial photography,’ originally developed by the US-based open source community Public Lab for environmental health and justice investigations. Using a camera attached to a kite or balloon, she works with local activists and communities to gain a birds’-eye view of contested spaces. In doing so, she is able to deploy aerial photography as a human rights testimony against discriminatory spatial and political practices.

Visual Rights is produced and curated by Gary Bratchford and Open Eye Gallery. It opens with a free public launch night on January 16th, 6-8PM. The exhibition is open until March 22nd, from Tuesday-Sunday, 10-5. Entrance to Open Eye Gallery is free, and all are welcome, always. Open Eye Gallery is supported by Arts Council England, Liverpool City Council, and Paul Hamlyn Foundation. Further support for this exhibition comes from UCLAN.