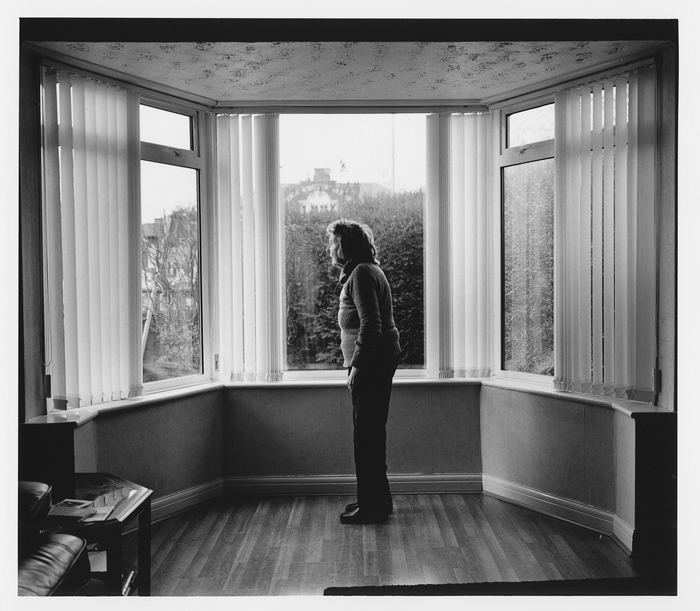 Open Eye Gallery is delighted to present a group exhibition of new photography enabled by the first national Jerwood/Photoworks Awards.

Three artists were selected from a call for applications to UK-based photography practitioners within ten years of establishing their practice. Each has received an award of £5,000 to support the making of new work for this exhibition, with a significant production fund and advice from a pool of thirteen Mentors including Alec Soth, Gillian Wearing, Broomberg & Chanarin and Michael Mack as well as curatorial advice from both of the award giving organisations.

Matthew Finn has been photographing his mother in a series of collaborative portraits since 1987.

Mother draws us into the fascinating dynamic of mother and son offering an intense and honest view of this most natural and universal of bonds. His Jerwood/Photoworks Award has enabled Matthew to revisit this series at an emotional time that has seen his mother, Jean, move from her family home into an assisted living residence. Jean’s mental health has changed her role in the portraits from active participant to one of an observed subject; widening the focus of his images towards objects and metaphor.

Joanna Piotrowska’s work explores anxiety and the effects of global and political events on the individual. Counteracting the passive role encouraged of adolescent girls, Joanna has enlisted young women to recreate poses from self-defence manuals. She offers the viewer a reclamation of the private body from the public sphere, and re-contextualising these poses within a domestic setting, feeds our fascination with the uncanny or the unheimlich.

Tereza Zelenkova has travelled to her native Czech Republic to explore themes of history, local legend and folklore. Tereza’s Jerwood/Photoworks Award enabled her to visit numerous locations, but the resulting images seem themselves out of place and time. Her eerily beautiful, black and white photographs of woodlands, stone structures and relics form their own dream-like, subconscious world, where stories fuel the viewer’s interpretation.

Open Eye Gallery looks to champion the work of photographers through all stages of their career, and working with the Jerwood/Photoworks Awards is an opportunity to support the emerging stage of the career path as part of a nationwide network of photographic institutions. Each photographer seemingly positions their project at a different scale of relationship to the individual, from a nebulous global sense of culture to the intensely personal family ties. As well as the consistently incredible level of work, developing this exhibition has been a pleasure, with the three projects ideally suited to the gallery architecture.

The Jerwood/Photoworks Awards are all about recognising future potential, supporting talented artists and their next steps. Working with our Awardees throughout the creative production process and seeing the ideas behind their projects develop into such strong bodies of work that may not otherwise have been mad, has been hugely rewarding. We’re looking forward to seeing where our Awardees’ career paths lead and to selecting from our next call for entries – open now and closing 2 November 2016.