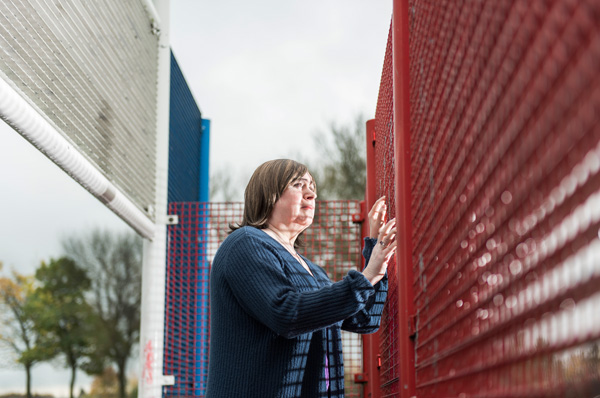 Exhibited in partnership with Homotopia.

12 large scale portraits examine the link between the sitter’s gender identity and their experience of military service. The title is an ironic re-appropriation of the derogatory command to toughen up, that is to ‘dry your eyes princess’, heard by many of the exhibition’s participants whilst serving in the British Armed Forces.

The portraits are of people from Liverpool and other parts of the country who participated in research conducted by Dr Emma Vickers, Senior Lecturer in History, at Liverpool John Moores University. Her work examined their experiences of life before, during and after service in the British Armed Forces. It is the first research in Europe to focus on trans* veterans and likewise, King’s photographic response is the first to look at trans* experiences of military service through visual art.

Dr Vickers’ research uncovered that trans* people in the armed forces were dismissed in significant numbers before the ban on openly-trans* personnel was lifted in Britain in 1999. She said: “Many interviewees said that they joined the services as a form of therapy, in the hope that the hyper-masculinity of the Forces would rid them of the discomfort they felt with their gender identity.”

King’s photographs are based on their oral testimonies as well as his own conversations with each sitter. He said: “Working with each participant, I was able to construct a portrait, not based upon each person’s identity, but on their experiences, using settings that were influential and meaningful.

“I am in a privileged position to collaborate with Dr Vickers and deliver what has been a fascinating project and humbling process”.

This is King’s second exhibition at a National Museums Liverpool venue. In 2010, Lewis’s fifth floor: a department story attracted record visitors to the National Conservation Centre.

Jen McCarthy, Deputy Director of the Museum of Liverpool, said: “Dry Your Eyes Princess comes after the groundbreaking Homotopia exhibition April Ashley: Portrait of a Lady that attracted almost one million visitors during its run. As a campaigning social justice museum, we actively engage with the diversity of the city, particularly its people and communities, and their stories. It’s great to work alongside photographer Stephen King again, as well as Liverpool John Moores University and Homotopia; people and organisations who share similar values to us, at the forefront of something unique – another Liverpool first!”

Trans* – an umbrella term for people whose gender identity and/or gender expression differs from the sex they were assigned at birth.