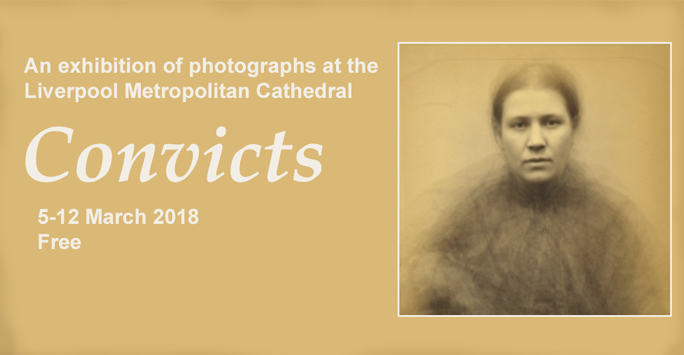 Convicts – An exhibition of photographs at the Liverpool Metropolitan Cathedral

Come face to face with convicted criminals from the 19th century, learn their stories and see how they were just like us in this fascinating exhibition of photographs and digital artworks, on display from 5-12 March 2018.

Organised by the AHRC Digital Panopticon, the University of Liverpool and Liverpool John Moores University, this exhibition will unveil the ‘average’ faces of real convicts by digitally combining multiple photographs of individuals convicted of various crimes. These images, as well as bringing to life a fascinating slice of British history, act as a definite rebuttal to one of the prevailing theories of criminology at the time.

In the last quarter of the nineteenth century, Cesare Lombroso theorised that some people in society had not evolved to the same level as others, and that ‘criminal types’ would have physical characteristics that allowed them to be identified. He examined prisoners in Italian and Russian prisons, measuring the angle of the forehead, size of ears, nose, length of arms, how close the eyes were together, and so on.

Despite Lombroso’s theories being widely disproved, the idea of a ‘criminal type’ has persisted into the twenty-first century but actually when we look at offenders now and then, it’s clear they were no different from anyone else.

Using digital techniques, this exhibition presents the ‘average’ faces of real convicts, many of whom came to Liverpool as new settlers, found themselves in trouble with the courts, but who then became part of the vibrant and bustling city of Liverpool in the nineteenth century.