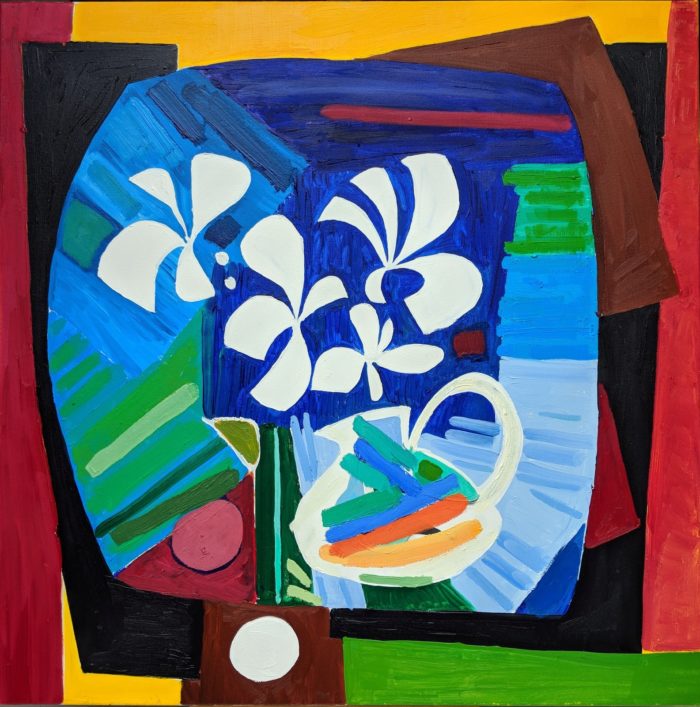 New collection of abstract and semi abstract paintings in intense colours painted by Andrew Marr in 2018.

A year on from Andrew Marr’s first solo exhibition at the Corke Gallery in Liverpool, Andrew has been busy painting a collection of new paintings especially for this new show, Angels and Open Windows, which marks the start of our Independents Biennial 2018 Series of exhibitions which run through until the end of the year.

In the extract below, from the Angels & Open Windows catalogue Andrew endeavours to explain what influences the way he paints and what has inspired the paintings in this new exhibition:

As a writer and a journalist, my mission is to explain as crisply and clearly as I can, what I am up to – and that goes for painting, as well as everything else. I loathe the abstruse hermeneutics of “art-speak” – the deliberately obscure, windy blather stolen by the art world from the worst of 20th century academic nonsense, basically in order to intimidate the uninitiated and keep the unwashed rabble at bay.

Good language is a bridge to understanding. Bad language is an electric fence. Essentially art-speak is about warning off and saying to the viewer. “Don’t trust your eyes and your own emotional reaction. You’re not educated and intelligent enough to understand what the Artist is up to.” I hate all that. So, at the risk of sounding naive or simpleminded, I want to be as clear as possible.

In the last show I had at the Corke Gallery a year ago, there were a series of pictures we called “bounce” which were, pretty obviously, all about falling and getting up again.  They were joyous in tone, brightly coloured. But when I made them, I was still preoccupied by problems of falling over, after my stroke a couple of years earlier. So, it seemed clear enough that these shapes had a meaning. They were part of the way I was coming to terms with disability.

After that, I found lots of images tumbling out.  Precipitous images. Images about going down, deep into the sea – I love snorkelling over reefs with fish –  and suddenly pushing high into the air.  In my dreams and in my drawings, I was leaning out of high windows, possibly about to fall out, into weird landscapes and seascapes.  Shooting stars and radically stripped-down figures, a little like jet-propelled angels, began to appear; and then simple feather-like wing shapes.  Since they come from my subconscious and I am not traditionally religious, I’m not entirely sure what if anything all this means. But I think it’s about a celebration of life opening up again, after a dark period.