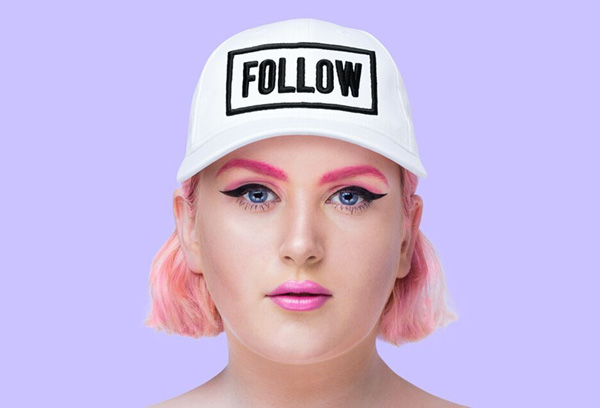 Be the first to see FACT’s new exhibition, when the galleries will be open all day for this very special opening event
FREE

Later on, celebrate the exhibition opening with us at Buyers Club, where we’ll be holding an afterparty from 21.00 – late. Click here to book tickets.

In a world where we use Instagram and Twitter ‘likes’ to assess who and what is important, the major new exhibition Follow will ask what impact the internet is really having on our concept of ‘reality’, and how we think about ourselves, our idols and those around us.

The diverse selection of approaches to the theme include artist Cécile B. Evans’ new video installation Commercials (It’s not possible, it’s real), which takes the form of commercials in a campaign, reflecting the real-time absurdity of contemporary marketing. The videos will be showcased both at FACT as well as online, offering audiences various ways to experience the piece. Another example is the online performance High Retention, Slow Delivery (2014) by artist Constant Dullaart, who purchased 2.5 million Instagram followers, which he then distributed amongst a cross section of the art-world Instagram profiles, highlighting the complexities of assessing value through ‘Likes’ or ‘Follows’ that can literally be bought. Follow will also showcase new work by art collective LaBeouf, Rönkkö & Turner, made up of Shia LaBeouf, Nastja Säde Rönkkö, and Luke Turner, who previously have created installations and performances across a variety of platforms including social media, art galleries and red carpet events.

The Follow Resource Space will feature a collection of journals, books, magazines, videos and games selected by the exhibition curators, situating Kim Kardashian’s Selfish book next to writing by thinkers and artists such as Hito Steyerl and Rob Horning.

Alongside the exhibition, Follow will present workshops, events and drop-in activities inviting visitors to discuss, and gain skills and knowledge about, the online platforms we use daily, but rarely critically think about. Most prominently, FACT’s experimental workshop space FACTLab will turn into a pop-up production studio, complete with green screen, lighting rig and basic filming and editing equipment, providing a space for critical experimentation around the way we use social media.

The studio is inspired by the YouTube Creator Spaces around the world that are open to an elite group of YouTubers with thousands of subscribers, with the difference that FACTLab will be an open space free for all to use – regardless of position in the social media hierarchy. Artist Louise Adkins has created a series of workshops to take place in the space, specifically looking into themes of online identity, celebrity and the reasons why we produce online videos in the ways we do.

Amy Jones, co-curator of Follow with Lesley Taker, says: “Fame is no longer an aspirational dream and celebrities are no longer created on the exclusive space of the red carpet, but on our Twitter feeds and Facebook walls. Follow looks into the ways we commodify, advertise and constantly curate our own image as our ‘product’, and explores how this can influence our sense of self.”

Art collective LaBeouf, Rönkkö & Turner is made up of Shia LaBeouf (US), Nastja Säde Rönkkö (Finland), and Luke Turner (UK), who have been working collaboratively over the last two years producing works, installations and performances which relate broadly to the concept of metamodernism. These projects have appeared in, and been created using, a variety of spaces and platforms including social media, art galleries and red carpet events.

Cécile B. Evans (US/Belgium) is interested in the digital circulation of human ideologies, using the content generated around them them as source material. Commissioned by FACT and Metal, Evans’ new video installation (It’s not possible, it’s real), showcased both at FACT and online, reflects the real-time absurdity of contemporary marketing, which awkwardly incorporates social issues, dry humour, and an intense deployment of emotion, striving to simultaneously shape, and be shaped by, viewers.

Constant Dullaart (Netherlands) works primarily with the Internet as an alternative space of presentation and (mis)representation. Documentation of the online performance High Retention, Slow Delivery (2014) will be presented as part of Follow, looking at the problems of validation through ‘Likes’ or ‘Follows’ and considering the commercial and capitalist impact when you can literally buy your followers.

Debora Delmar Corp. (Mexico) examines the ways in which commodity culture structures our everyday life by reconfiguring the production, branding and merchandising techniques of global corporations. In 2009, Delmar adopted the name Debora Delmar Corp. for the distribution of her work to reflect on the state of 21st-century living, and later found the Debora Delmar Corp. logo being commandeered by a chain of hospitals in Los Angeles and tattooed onto the hips of supermodels Cara Delevigne and Jourdan Dunn. Follow will present a project where Delmar questions who came up with this logo first, and if it even matters. Debora Delmar Corp body transfers will also be available as part of the installation, allowing visitors to become DDC representatives.

Joe Orr’s (UK) sculptures, performances and installations use humour to undermine the ‘seriousness’ of the art world, and the authority of the art object. Orr traces his willingness to poke fun at his own work and contemporary art to visits he made with his father to art galleries as a young boy, when he would be encouraged to laugh at many of the works on display. For Follow, Orr will explore artistic production by combining traditional sign writing techniques with the platform many contemporary artists now use to disseminate their work; Instagram.

Ant Hamlyn (UK), FACT and Liverpool Hope University Production Resident, has created The Boost Project for Follow, exploring how the power of social media can give us a temporal state of appreciation. An inflating orb, symbolizing the sense of self-worth that we can feel after receiving ‘likes’ online, will grow in size if liked through Facebook, Tweeted about or Hashtagged via Instagram. If the orb is ignored, over time it will subtly deflate and fade into the background of our lives.

Mark Shepard (US) is an artist, architect and researcher whose practice addresses new social spaces and structures of network cultures. Moritz Stefaner (Germany) works as a “truth and beauty operator” on the crossroads of data visualization, information aesthetics and user interface design. Their project False Positive (2014) is a performance and workshop, which exposes the hidden processes by which personal data can be collected and used to make “data-portraits” of users, aiming to catalyze the public debate surrounding the politics underlying mobile communication.

Through public interventions and public installations, Aram Bartholl (Germany) examines how the digital driven reality impacts the city every day life. For Follow, Bartholl has adapted a Penny Press, typically found at tourist destinations across the globe, to generate souvenirs of the Internet in form of pressed pennies. The work questions the physical status of the Internet while encouraging us to re-think our understanding of the inseparable online-offline relation we live in today.

Louise Adkins is an artist based in Manchester and a senior lecturer at the School of Art. Adkins’ practice explores themes of appropriation and the re enactment of cultural references and events, incorporating new media, dance, music, sport and film as a way of reading and understanding recent histories. She is interested in the relationship between live performance and digital media and how new technologies can foster alternative narrative within performance-based practice. For Follow, Adkins has created a series of workshops which look into themes of online identity, celebrity and the reasons why we produce online videos in the ways we do, allowing visitors to gain skills and knowledge about the online platforms which we use daily, but rarely critically think about.

Simon Whybray’s (UK) design for Follow’s brand identity centers around one main character. Shot by Diamond Wright, this unnamed character (modelled by Cora Delaney) demonstrates the tension between personal identity, advertising and branding through a series of provocative and challenging images. Based in London and Los Angeles, Whybray has been working in brand-design for a decade. With his company HYPER®, he runs international scene-birthing club night JACK and presents his monthly show RADIO JACK on NTS in London.

Femininity, serenity and tranquillity, the promise of paradise and perfection; Candice Jacobs’ (UK) work as an artist illustrates her intimate knowledge with the world of advertising, of brand identity and of creating an unattainable lifestyle ideal to promote continually self-sustaining desire. For Follow, Jacobs will communicate the concepts of the show through a 3D exhibition design, which explores the meaninglessness of aspiration through an array of seemingly luxurious surfaces and textures.