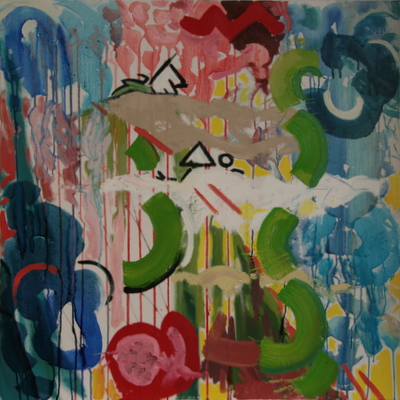 Andrew Marr is best known as a television presenter and as a writer; but his greatest passion is for painting. This will be his first public show, and comprises scores of pictures completed over the last two to three years following a major stroke in 2013. They are, he has said “pictures about being alive – about the brevity and the beauty of it” and we are calling the exhibition Strokes of Colour. All the painter’s profits will go to a rehabilitation charity, ARNI.

The works are in oil on canvas and board and are largely non-representational, influenced by the mainstream Scottish and English “abstract” tradition of the past few decades. Before his stroke, Andrew was a regular “Sunday painter”, making oil landscape sketches but his disability has made this irksome and almost impossible – dealing with an easel, oils and paints, and the British weather is difficult enough with two arms and two strong legs. Luckily, thanks to the kindness of a local friend, he was able to open a studio and start again in a new way.

Why Liverpool? The origin of the exhibition was a chance meeting in an aircraft in Italy between Andrew and the Corke Gallery owner Nic Corke. Andrew was keen to have his first show well away from the London hothouse, but in a city with a strong tradition of serious painting; and Liverpool fits the bill perfectly. The show will open with an invitation only Private View on June 14 and will run for six weeks thereafter; Andrew will be making several visits to the city to speak about the pictures and answer questions.
Paintings in the Strokes of Colour exhibition are featured and discussed in Andrew’s new book A Short Book About Painting, due for publication in November 2017 (Quadrille, £15.00, hardback). This follows up on Andrew’s 2013 publication A Short Book About Drawing (also Quadrille). The new book uses historical examples as well as his own works of art to assert his points. Marr’s provocative, political and instructive book is not just an essential resource for all amateur painters, it is a must-read for anyone fascinated by the creative process and the limits of human artistic achievement.