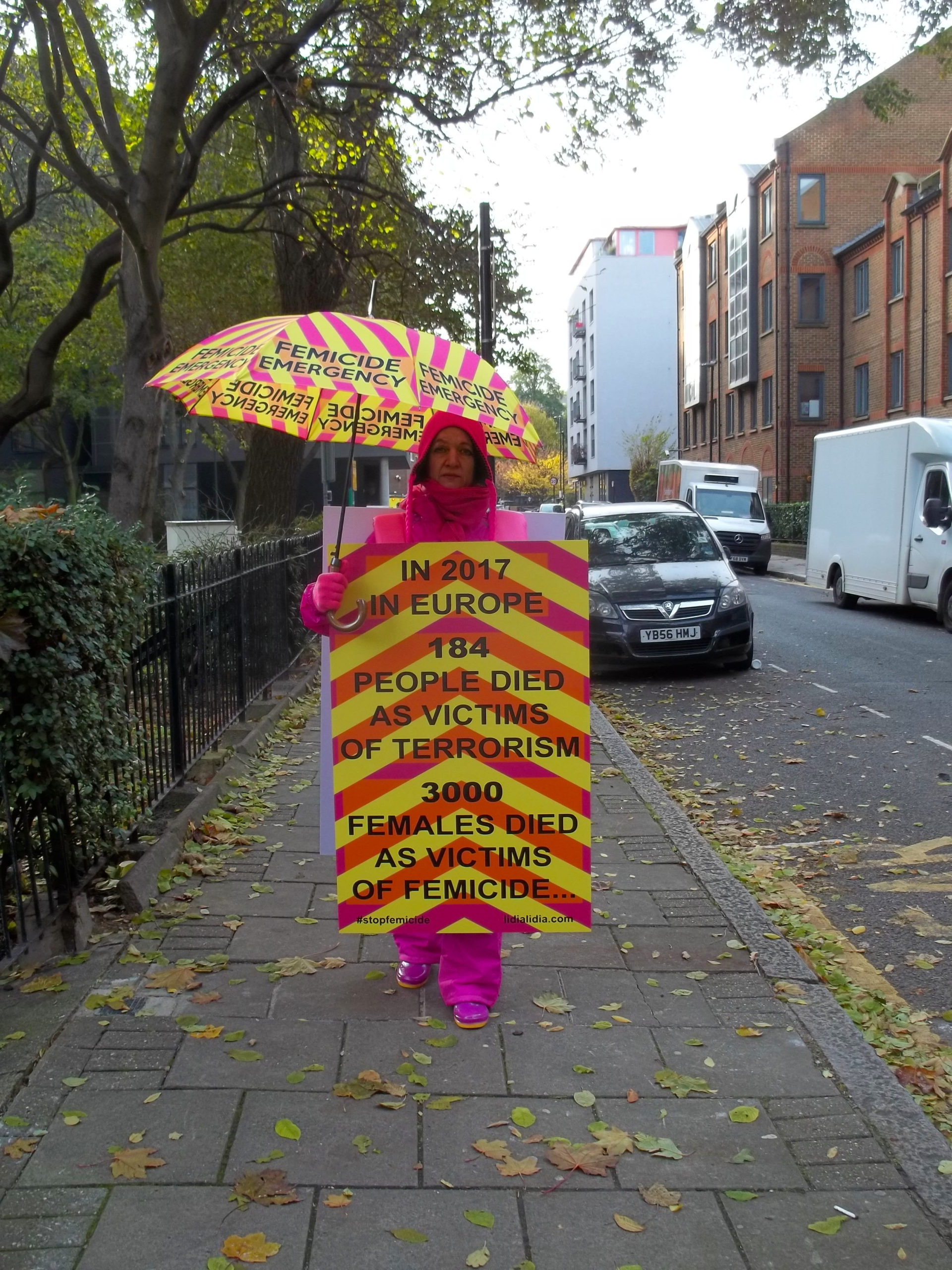 So it says on a sandwich board worn by the artist Lidia Lidia. ‘1:16 – Femicide Emergency -‘ is the second intervention of an artivism project by the UK based artist and activist.
The event will happen on the streets of Manchester (25th November), Liverpool (26th and 27th November) and London (from 28th November to 10th December) during the 16 Days of Activism against Gender-Based Violence lead by UNITE

Femicide is the intentional killing of females (women or girls) because they are females. It is on the extreme end of a continuum of anti-female terror that includes a wide variety of verbal and physical abuse Whenever these forms of terrorism result in death, they become femicides.’ [2] [3]

Lidia is trying to highlight the urgent need for European countries to change their legal framework or at least to incorporate a definition of ‘femicide’ into their criminal laws, which none of them have. This is in sharp contrast to the common European definition of terrorism that has been established since 2002 in a document obliging an alignment of national legislations, including the implementation of preventative measures. Lidia is trying to highlight the imbalance between the numbers of the victims of terrorism and femicide and the disparity of action in response.

The Istanbul Convention, ‘the first instrument in Europe to set legally binding standards specifically to prevent gender-based violence, protect victims of violence, and punish perpetrators’, is still after 8 years, yet to be ratified by all European countries. Despite the fact that the Convention is an effective way to coordinate policies and measures to prevent and combat violence against women throughout all European countries, a number of governments and religious groups oppose it because they see it as a threat to their ideology, traditional family structures, gender roles and culture.

Lidia also wants more people to be aware of the meaning and extent of femicide, and starkly comparing the number of deaths from the 2017 figures on the Global Terrorism Database and the UN’s Global Study on Homicide 2018 seemed a clear way to do it.

Around 50,000 women and girls were killed around the world in 2017, at the hands of intimate partners or family members. This amounts to 137 per day and about 6 every hour. These are the shocking numbers that emerge from the research, published on the International Day for the Elimination of Violence against Women on 25th November 2018 by the United Nations Office on Drugs and Crime (UNODC).

The study analyses the gender-related killing of women and girls, with a specific focus on intimate partner and family-related homicides and provides numbers on international femicide, based on the analysis of the latest available data.

The publication is part of the ‘Global Study on Homicide 2018’, which focuses on links between homicide, sustainable development and the rule of law.

“Rather than a new form of violence, gender-related killings are the extreme manifestation of existing forms of violence against women. Such killings are not isolated incidents that arise suddenly and unexpectedly, but represent the ultimate act of violence which is experienced in a continuum of violence. Women subjected to continuous violence and living under conditions of gender-based discrimination and threat are always on death row, always in fear of execution.” – Report of the Special Rapporteur on violence against women, its causes and consequences, Rashida Manjoo –

Lidia Lidia is a multidisciplinary artist who works with installation, video, photography, performance and activism. Using strong and sometimes disturbing images in combination with extensive research her work aims to produce beautiful images to communicate uncomfortable narratives, generally rooted in social injustice and inequality. If you see it, please send pictures of the van to lidia@lidialidia.com

More information about her work can be found at www.lidialidia.com.