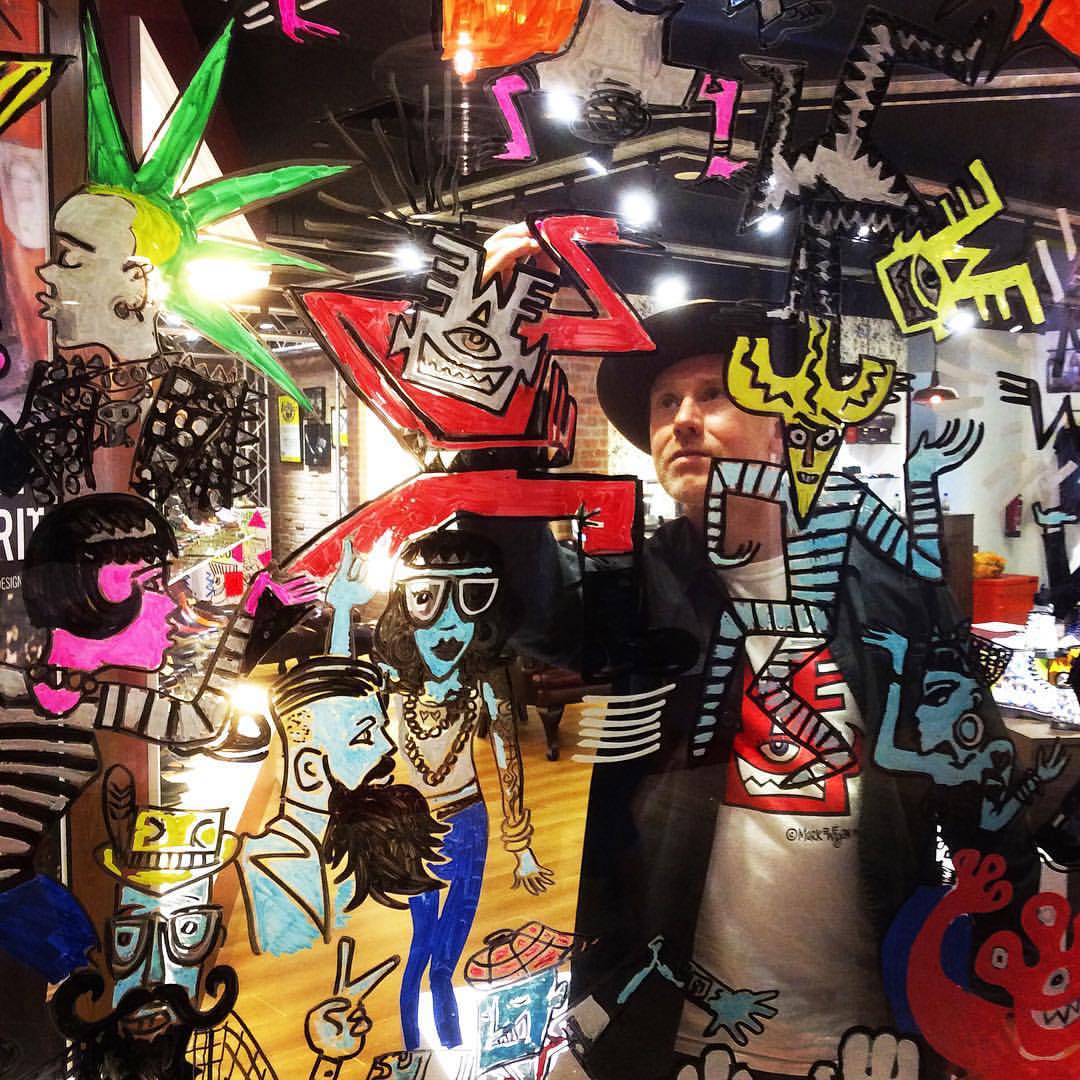 The Transglobal Art of Mark Wigan

BORN IN NANTWICH CHESHIRE MARK WIGAN HAS BECOME ONE OF THE UK’S MOST INFLUENTIAL GRAPHIC ARTISTS. HE PIONEERED URBAN ART IN LONDON, NEW YORK AND TOKYO IN THE 1980’S AND 90’S. HE CREATES SOCIAL AND CULTURAL HIEROGLYPHS FOR OUR TIME AND DRAWS INSPIRATION FROM SUB CULTURES AND STREETSTYLE FROM AROUND THE WORLD.

The exhibition features videos and photography of live painting performances, exhibitions and projects undertaken over the past 30 years in Europe, USA and Asia and recent paintings, sculptures, merchandise and prints. The show will also showcase his latest narrative illustrations A Village Lads Career (the reading between the lines to be left to the imagination) inspired by a seafaring ancestors nineteenth century globetrotting journal which documents his travels from Liverpools Salt House docks in 1885 across the world to China, Japan and Australia.

He has lectured at art schools around the world, leading the BA (hons) and MA programmes in Illustration at Camberwell College of Arts and BA (hons) Graphic Design at the University of Salford. Wigan has written six books on Illustration the Basics Illustration series and The Visual Dictionary of Illustration published by Bloomsbury.

Most recently his vibrant artwork has featured on a collection of boots, shoes, backpacks and t shirts for Dr Martens. The acclaimed DrMartens X MarkWigan Collection has been enthusiastically received all over the world. During the exhibition Wigan will be giving a talk about his artwork and latest projects, this is a good opportunity to meet this Chester artist and hear about his forthcoming exhibitions at The Museum of Club Culture in Hull as part of UK City of Culture 2017 and Shanghai where he will be exhibiting his latest collaborative fashion project in the summer.

“If a picture tells a thousand words Wigans drawings are worth an entire library of professorial works on pop culture, early works from 1985 are now revealed as astonishinglyaccurate maps, showing the development of the attitudes that defined sub cultures.” The Independent Newspaper

“Wigan is the court chronicler to the transient vanities of our age .A typical picture depicts adherents of every cult under the moon jostling cheek by haircut for lebensraum in the bowels of any club. Its anthropology a go go” The New Musical Express

“A seminal figure amongst the art scene of the 1980’s (Andy Warhol and Jean- Michel Basquiat were acquaintances), Wigan’s hand painted, busy scenes are the latest subcultural artwork to be tapped by the bootmaker.” Clash Magazine