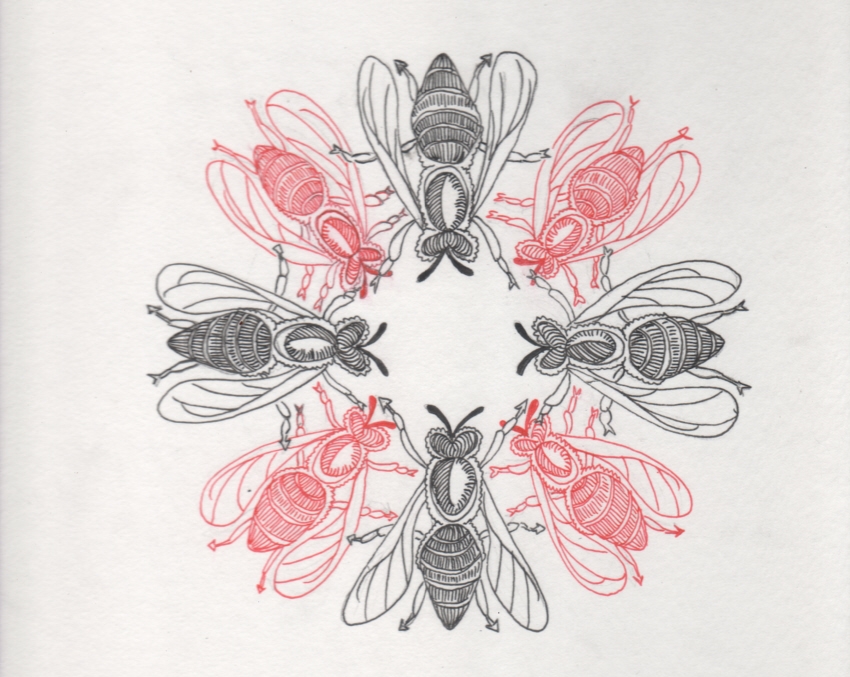 ‘The Swarm’ is a dynamic new immersive opera and sound project about honey bee swarms.

It narrates the story of the perilous journey of migrating honey bees through a city with their queen after she is deposed by her daughter and forced to leave the hive, taking half the colony with her. In their search for a new home they encounter a deadly extractor fan, a thunder storm and a fierce debate over two potential sites to build a hive. With just one last meal of honey for energy, how will they reach a collective decision on where to relocate?

This innovative 45 minute work will bring audiences closer to nature, stretching the boundaries of choral music, voices and movement. The 9 piece choir representing the bees, will be combined with a soundscape comprising field recordings and composition evoking the urban landscape.

The behaviour of bees is used as a paragon for modern social science. Their modes of collective decision making have been recognised by our society and have much to teach us about smoothly functioning groups, especially ones capable of exploiting fully the power of democratic decision making. Additionally, the bees provide a fertile subject for the musical composition. Sound and vibration are central to their communication and cooperation in the beehive.

Inspired by the bees, ‘The Swarm’ will explore the fluctuating magnetism between the individual and the collective, which will be expressed physically, spatially and musically.

The devising process has involved extensive consultation with beekeepers, Behavioural Scientists, Neuroscientists and Biologists and will involve new compositions.

Three site specific performances are planned for September 2016 in the Brunel Tunnel, Rotherhithe and The Car Park Space in Liverpool.

The project has been generously supported by Arts Council England, RVW Trust and private sponsorship