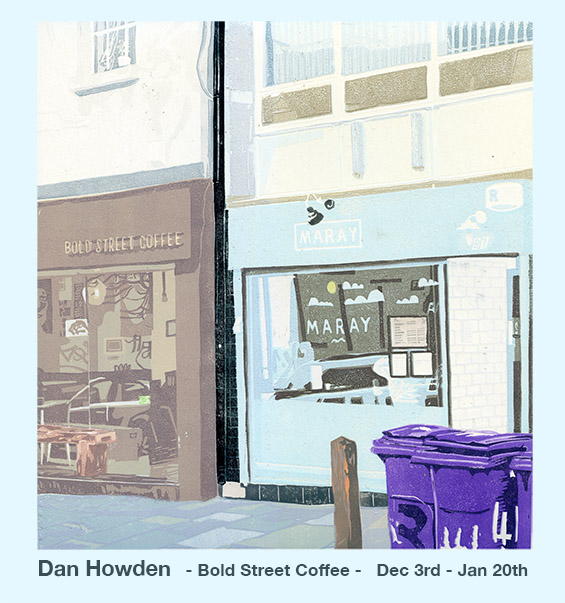 Hung within Bold Street Coffee, the exhibition will comprise of 13 architectural linocuts I’ve produced over the course of the past year, all available to buy. These prints include scenes from Cape Cod, London, Kuwait, York and Liverpool. The exhibition will hang from Saturday the 3rd of December until the January 20th, 2017.

Dan graduated from Liverpool John Moores in July 2015 studying BA Illustration. A printmaker, first and foremost, his work comprises almost entirely of linocut, a process he’s practiced since 2011. His approach to lino is unconventional in that he uses many layers, sometimes exceeding a hundred, which give his pieces the appearance of paintings as opposed to linocuts, a medium known for its minimalist aesthetic. Dan’s work is heavily routed in location. A pilgrimage to Cape Cod in 2014 sparked this interest and upon returning home, he produced a linocut series depicting the Cape, its architecture and its residents. Since then, he’s gone on to illustrate London, Kuwait, York and Liverpool, working from photographs he’s taken personally.

Upon Graduating, Dan returned home to York for a glorified ‘gap year’ which he spent collating a body of prints that built upon the Cape Cod Kwassa Kwassa series that brought him his first attention whilst at university. Dan received his first taste of exhibiting work when he took part in York Open studios throughout April of 2016 and in May was accepted to study visual communication at The Royal College of Art. Unfortunately, he was left with no choice but to decline the offer as the cost of living in London for two years, with the addition of fees, was astronomically high. Awarded the Anthony Dawson Young Printmaker of the Year Award for 2016 in November, Dan is now studying MA illustration at Manchester School Of Art where he’s attempting to expand his personal practice whilst furthering his understanding of print as a medium.