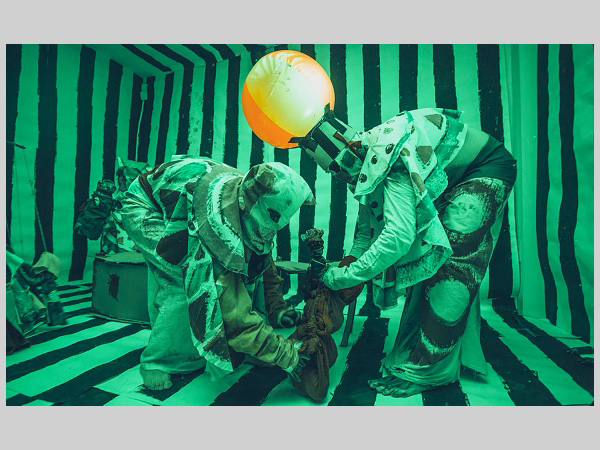 Artists participating in Liverpool Biennial 2016 are invited to co-create a number of episodes, together and with the curatorial faculty, taking a number of scenarios as starting points. Through conversation, Ancient Greece might become Medieval Europe, and the software package might become a virus.

Join some of Liverpool Biennial’s participating artists and hear them talk about their work.

This is the sixth in a series of public conversations that exposes and proposes ways of working towards Liverpool Biennial 2016.

Alisa Baremboym (b.1982, Moscow, Soviet Union) lives in New York, USA. Baremboym’s work investigates the processes that trace and enact the potentiality of material through erosion and transfusion. Blurring the assumptions in regards to material understanding, her works appropriate and extend critical aspects of materiality in order to gain new insight into the consequences of consumption in our daily lives. Her previous solo exhibition took place at 47 Canal, New York, USA (2015). Her work has been included in numerous group exhibitions in venues such as Schinkel Pavillion, Berlin, Germany (2015); Künstlerhaus KM–, Graz, Austria (2015); Taipei Biennial, Taiwan (2014); Fridericianum, Kassel, Germany (2013); MoMa PS1, New York, USA (2013); and Sculpture Center, New York, USA (2012). In 2016 she will present new works at Glasgow Sculpture Studios as part of Glasgow International, Glasgow, UK.

Audrey Cottin (b. 1984,Saint-Mandé, France) lives in Brussels, Belgium. Cottin is a French (magician facing the wheel of fortune under the sun) artist based in Brussels. Her appearance is colourful, sculptural and spinning. She shares comfort and uneasiness of being in the company of people who don’t stop keeping this world as a continuous creative experiment. Inspired by Robert Filliou’s belief that “everybody is perfect”, Cottin has been searching for a perfect collaboration with people she encounters. This search may include experts of various knowledges, skills and perspectives. The methods of co-working are often defined by what kind of resonance is created between those people* and Cottin herself. Cottin is represented by Galerie Tatjana Pieters, Gent, Belgium.

Ana Jotta (b. 1946, Lisbon, Portugal) lives in Lisbon. Jotta makes painting and sculptures. Her work always includes an erasure: of her own previous footsteps; of modernist ideology and post-mortem mythologies; and of the notion of authorship – either by deconstructing it or rebuilding it. From 1976-79 she was an actress and stage designer with Produções Teatrais, Universidade Clássica, Lisbon, Portugal (1976-79). From the 1980’s onwards, she focused her activity on the visual arts. Solo exhitibitons include venues such as Culturgest, Lisbon, Portugal (The Conclusion of the Precedent, 2014); Lisboa 20 Arte Contemporânea, Lisbon, Portugal (2006); and Museu de Serralves, Porto, Portugal (Rua Ana Jotta: Retrospective, 2005).

Plus more to be confirmed.