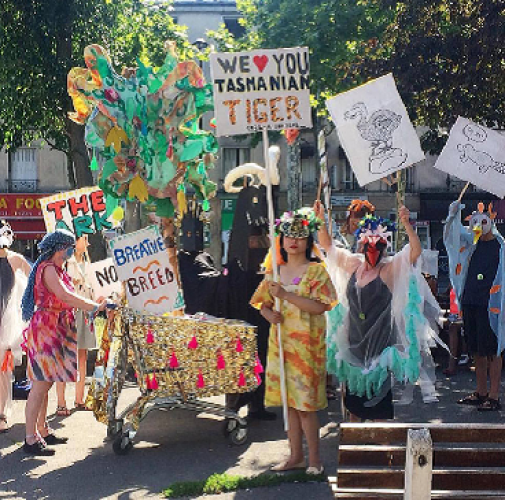 The Ark: A Historic Archive Show is an exhibition based on the Grace Ndiritu’s research created before, during and after her ambitious post-internet living research/live art project, The Ark: Center For Interdisciplinary Experimentation, that took place from 1 to 10 July 2017 in Paris. Part scientific experiment and part spiritual experience, it focused on the role of art, science, spirituality and politics. In order to encourage creativity and vulnerability and to come up with radical, new ways of thinking about life and the problems of today’s world, The Ark had no audience for the first six days, so the 15 participants (scientists, artists, gardeners, economists, chef, spiritual workers) could go deeper into this process. The Ark aimed to firstly open a dialogue between its own participants through a multiplicity of themes including Plants, Biology, Shamanism, Meditation, Food, Philosophy, Communities, Education, Architecture, Future of Cities, Democracy and Activism; and secondly with a wider audience during the Public Weekend – performances, film screenings, BBQ party and Academic Roundtable. The Ark originally took place at Les Laboratories Aubervillers art space.

Now recontexualized at Bluecoat, Liverpool a space with a history of working with ecological activism,  The Ark archival materials generated will serve as a foundation for an exhibition dealing with a complex dialogue between differing ideas of viewing the world through the lens of both postmodernism and modernism. Ndiritu writes “There is no coincidence in the fact that a resurgence of interest in Modernism in the western art world is occurring at the same time as countries in the ‘South’ – Brazil, India, China, South Africa– are starting to flex their global economic muscle. Most modern institutions are out of sync with their audiences’ experiences and how global changes have eroded the relationship between audiences and collections. Museums are dying. Ndiritu sees shamanism as a way to re-activate the dying art space as a space for sharing, participation and ethics. From prehistoric to modern times the shaman was not only the group healer and facilitator of peace but also the creative; the artist.”

These are ideas are now given full expression at Bluecoat through the mixing of non-rationalist pedagogy, videos of a traditional modernist painting school in Morocco and her lived research on community, farming, permaculture, ecology to create a platform to discuss these topics. For example during the run of the show Ndiritu will hold on Saturday, July 6, A History of Resistance with Grace Ndiritu on the intersections of hippie counterculture and radical leftist activism. The conversation will begin with a discussion of Simon Sadler’s text “Mandalas or Raised Fists? Hippie Holism, Panther Totality, and Another Modernism” which unpacks California’s Bay Area 60s activist scene and the overlaps and distinctions between the Black Panthers and the activism that emerged around the Whole Earth Catalog, a hippie almanac published by Stewart Brand between 1968 and 1972. The discussion will be punctuated by short silent meditation breaks led by the artist.

This performative action is done to activate the exhibition at Bluecoat and animate its presence, as a ‘living’ research project and not just as a ‘dead’ historized’ archive. And this rendering is displayed further within the exhibition publication that incorporates texts from The Ark participants and Ndiritu herself..

Grace Ndiritu is a British-Kenyan artist who, in her work, refers to issues of re-activating ‘the dying art space’ as a space for sharing, participation and ethics i.e. Healing The Museum – as well as to problems connected with transformation of contemporary world including, in particular, the impact of globalisation and aggressive geopolitics.

Ndiritu took the radical decision in 2012 only to spend time in the city when necessary, and to otherwise live in rural, alternative and often spiritual communities while expanding her research into nomadic lifestyles and training in esoteric studies such as shamanism, which she began over 16 years ago. Her research so far has taken her to both Thai and Tibetan Buddhist monasteries, permaculture communities in New Zealand, forest tree dwellers in Argentina, neo-tribal festivals such the ‘Burning Man’ in Nevada, a Hare Krishna ashram and the ‘Findhorn’ New Age community in Scotland. Her research into community life has so far resulted in the founding of The Ark: Center For Interdisciplinary Experimentation.

Ndiritu has been included in the group exhibition In the Peaceful Dome at Bluecoat in 2017 and her work was also selected by Sonia Boyce for inclusion in her exhibition Like Love at Bluecoat in 2010. In 2018 Ndiritu launched COVERSLUT© a new ‘Pay What You Can’ fashion label focused on democracy & class struggle, that involves working with refugees and migrants.