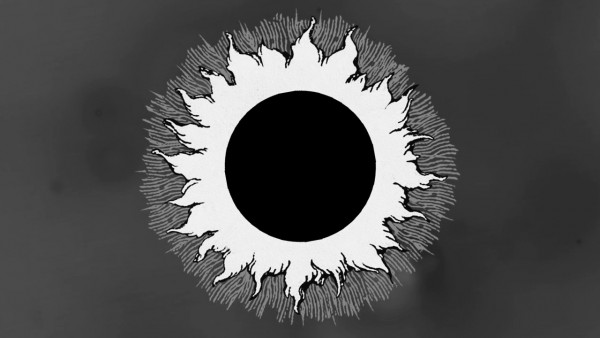 Liverpool based artist David Jacques shares Larissa Sansour’s interest in the intersection of art and politics, fantasy and fiction. Here he presents the Liverpool premiere of new animated short film Oil is the Devil’s Excrement, which imagines alternative origins of the Organization of Petroleum Exporting Countries (OPEC).

David Jacques’ recent body of work Oil is the Devil’s Excrement is a mythopoeic take on the 20th Century rise of an Oil Industry inextricably tethered to Capitalism. The  title derives from a speech given in 1975 by Juan Pablo Pérez Alfonzo, the then Venezuelan Minister for Energy and originator of OPEC who prophesied: “Ten years from now, twenty years from now, you will see; oil will bring us ruin. Oil is the Devil’s excrement”.

Central to the project is a short animation involving an ailing, delirious Alfonzo being visited at his deathbed by ‘Oil’ presenting as an abstract, sentient entity. The narration is provided by a daemonic chorus who capriciously flit through the proceedings, proclaiming through a mash-up of karaoke and heroic pentameter. They weave through a variety of thematic references taking in Jungian readings on Medieval Alchemy, Weird Fiction and the global affect of Biopolitics.