Home The Atkinson: The Landing: Colourfields by Frank Barnes

The Atkinson: The Landing: Colourfields by Frank Barnes 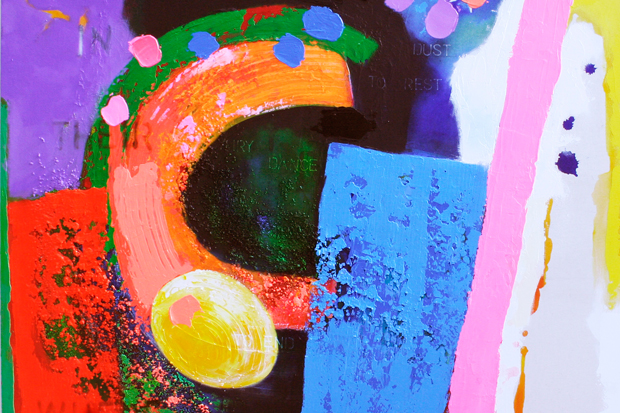 The Atkinson: The Landing: Colourfields by Frank Barnes

lives and works in Southport. ‘Colourfields‘ is a selection of paintings made between 2014 and 2017. Frank uses acrylic and oil paints, dichlorotriazine dyes and fragments of sea shells on a base of un primed canvas and canvas paper to create the works.

The sources that have inspired this body of work are quite diverse although there is a common thread relating to travel and experiences of different locations and cultures. There are also frequent references to historical and ancient signs, symbols, motifs and mythologies. The images have been developed through a process of spontaneously creating fresh visual melodies over structured backgrounds that form the settings for the compositions. The paintings are named as ‘characters’. Sometimes the names are chosen because of a relationship to the idea or a memory, and sometimes names are invented to compliment the character of the work.’

“It’s difficult to talk about colour as an ‘idea’ in a rational way, yet nothing can compare with its infinite possibilities and the multiplicity of its possible meanings. A smudge, a smear, a stroke of colour can be any number of things depending on shape, transparency, density, scale and context etc. The setting and sources for my paintings originate from a simple vocabulary of motifs, symbols and signals which relate to events, locations and memories. I try to paint as automatically as possible. The paintings are intended as glancing episodes composed within illusionistic spaces. Hopefully there is honesty in the way the paintings are made. The paintings are built in layers, each subsequent layer adding to a series of cancellations which partially veil the applications of colour, and spark improvisations”

Frank is also inspired by the work of historical, modern and contemporary painters. Fra Angelico, Paul Gaugin, Henri Matisse, Hans Hoffman, Helen Frankenthaler, Alan Davie, Corneille and the COBRA group, John Hoyland, David Hockney, Bhupen Khakhar and Barbara Rae have been particularly inspirational. Such artists may be diverse in their manner but all are seen as ‘colourists’.