Home ArtHouse Gallery: Portraiture in Oils by Neil Prior

ArtHouse Gallery: Portraiture in Oils by Neil Prior 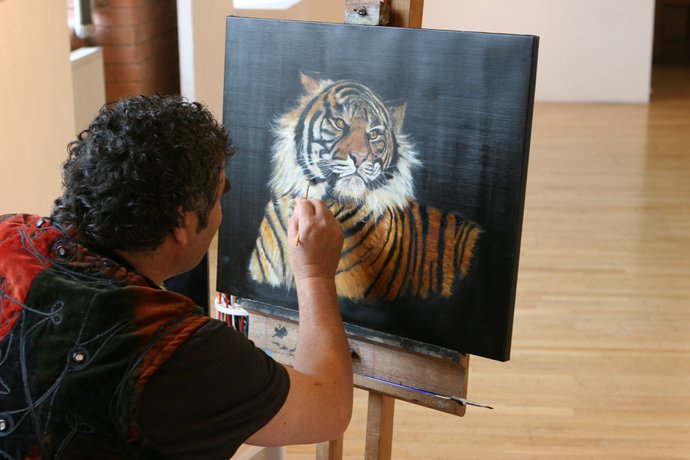 ArtHouse Gallery: Portraiture in Oils by Neil Prior

PORTRAITURE IN OILS by Neil Prior

Neil Prior, a professional portrait artist now living in Southport after retiring in 2018 as a police officer with the Leicestershire Constabulary, will be bringing together a large collection of his original oil paintings in a 3-week retrospective at The ArtHouse in Southport.

What wildlife artist, David Shepherd was to elephants, Neil has certainly proved his own worth with his life-like portraiture of domestic pets.

Neil found that his move up North two years ago has been fruitful in the large number of commissions he has completed of dogs and cats in oils and these, along with other portraits of wild animals, will be available to view and purchase in the new exhibition of over 30 paintings.

Neil originally started painting in 2008 following a one-day workshop on ‘How to Paint like Bob Ross’ facilitated by Jayne Goode using the wet-on-wet technique. He followed this up with a weekend course with professional artist Mike Skidmore on Fine Art technique and has since expanded those ‘newly’ acquired skills for over a decade to develop his own signature portraiture style.

From his days back in Hinckley, Neil has always been keen to share his talent. At his first solo exhibition he demonstrated his oil painting skills by painting a portrait of ‘Kinta the Tiger’ live during the show.

“During my first solo exhibition in June 2017, I completed the portrait of the Malaysian Tiger and entitled it KINTA, which was an anagram of the exhibition venue (ATKIN’S BUILDING) and just happened to be the name of the river that runs through Malaysia where these beautiful animals are from.”

Neil still continues to enjoy painting both animal and human portraiture. Using the skills he has acquired over the years he always aims to achieve as realistic a look to his subject as possible. Neil is a firm believer that capturing the eyes of his subject is key to maintaining and completing a more realistic composition: “I believe painting the eyes early on gives me a better understanding and feeling of the subject, almost an empathy“.

Over the years Neil’s gregarious attitude to art has seen him expand his repertoire across a diverse range of subjects. He now balances his pet portraiture with copies of Old Masters and examples will be on display at the new exhibition, including Vermeer’s ‘Girl with the Pearl Earring’ and Caravaggio’s ‘Bacchus’.

During the exhibition, Neil’s works will be available to purchase both in original format and/or order in giclée print format.

PORTRAITURE IN OILS will run from 24th August – 11th September at SCA/ArtHouse, 65 Eastbank Street (Tues thro Fri 10.00 – 15.00 and Sat 11.00 16.00). In line with Government advice, the SCA team have introduced strict measures to keep visitors to the Gallery as safe as possible: There will be a policy of 2 visitors at a time, with social distancing once inside, and hand sanitize dispensers at the door to use on arrival.

More of Neil’s work is available to view on Facebook via Neil Prior Artist and at neilprior.com.