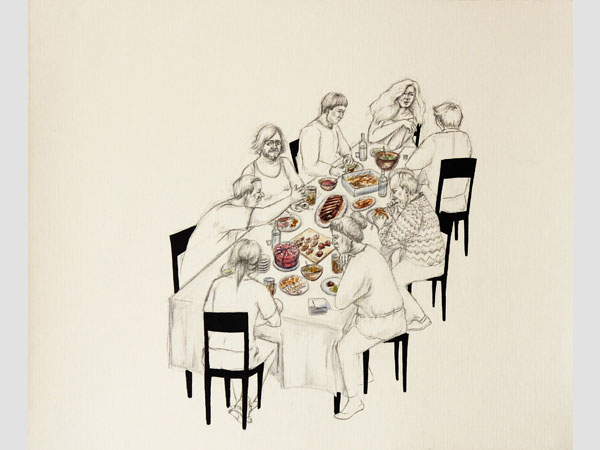 Carnival
‘Carnival’ is an exhibition consisting of two animations, which draws an image of a
common dinner party, reflecting the social and cultural issues surrounding such
varied feasts. Inspired by real characters and celebration methods, the artist
questions the importance and the reasons underlining these festivities, echoing a
time when it used to be a ritual, a performed sacrifice to propitiate and worship the
gods.

The two pieces, both entitled ‘Carnival’, represent a feast with huge amounts of food
and drink, inducing unconscious behaviour that aims to fulfill secret desires and let
natural instinct take over. These animations talk about the primitive impulses we are
confronted with on a daily basis, raising the question; who is responsible for the
consequences? In the context of post-modern culture, the story presents a ritual,
where people would honor the gods for the goods they received by means of a feast,
while now its only purpose is to meet our expectations.

Through the use of animation, Inga Lineviciute has created a surreal narrative
dealing with drama, flirtation, jealousy, lust and anger. Inga uses drawing as a tool to
illustrate repetitive actions that remain absurd and never ending.
Carnival is the outcome of returning back home to Lithuania after living and studying
in England for 3 years, visiting relatives and attending their 5-course dinners,
listening to their stories and being asked if anybody wishes to slaughter the pig. It is
also a mixture of situations that occurred at pubs and other venues.
The projected moving-image works are identical, however one shows the image from
a distance, while another shows what is under the table. Together they support each
other and reveal what can’t be unseen.