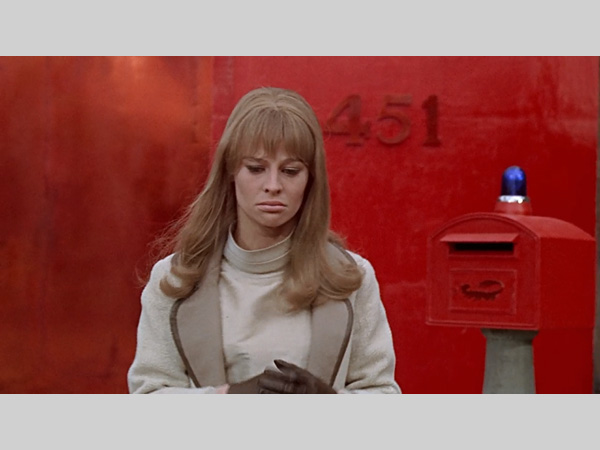 All profits from ticket sales go to The Whitechapel Centre: the leading homeless and housing charity for the Liverpool region.

“Because they make people unhappy”

What would happen if all culture, all books were eliminated? Illegal? Burned if discovered?

Auteur director (Jules and Jim (1962)) and writer (Breathless (1960)) François Truffaut’s screen version of Ray Bradbury’s bestselling 1953 dystopian novel (widely regarded as one of his finest works), Fahrenheit 451 conjures a nightmare vision of a future society in which ideas and creativity are violently suppressed.

‘Firefighter’ Guy Montag (played by Oskar Werner) burns books; forbidden by the government, and seen as dangerous, subversive objects to be wiped out entirely, Montag hunts down and destroys every book he can find from a frightened populace. Those found guilty of harboring books are drugged into confession and eventual compliancy. Those that believe in books — and therefore culture, freedom of expression and education – work hard to covertly memorize single tomes and whole collections in order that they may live on in the mind.

It is only when Montag meets – and falls in love with – young book collector Clarisse (Julie Christie) that he really begins to question his bosses’ true motives. Will he denounce free thinking, or face the consequences of becoming one of the criminals he formerly condemned?

Screened in conjunction with Tate Liverpool’s provocative exhibition Works to Know by Heart: An Imagined Museum, introduced by The Double Negative founders Laura Robertson and Mike Pinnington, and including a reading from the original Bradbury novel, we present a film asking questions around a not-so-difficult-to-imagine near future where art and culture is under threat.

A film, in the context of unrelenting budget cuts, religious censorship, and political indifference, which asks questions of how to preserve a shared heritage for future generations and, if it came to it, how to choose which creative works to salvage from the fire…

‘Frightening in its implications… Mr. Bradbury’s account of this insane world, which bears many alarming resemblances to our own, is fascinating’ – The New York Times