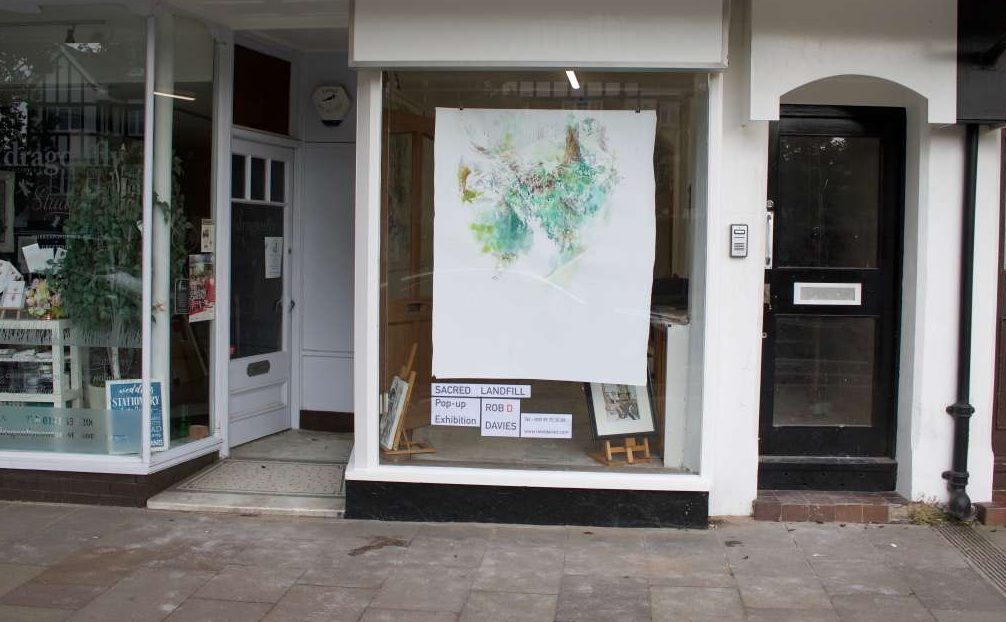 Open weekends until the end of July 2018

Rob D Davies has taken over an empty shop on Market street in Hoylake (number 32) until the end of July, and has filled most of the space with several large (some 185cm’s long) watercolour/mixed media paintings (as well as a few works on canvas) that were initially developed on a one-year studio residency at ‘Metal’ in Edge Hill station (though he had been working on large sheets of paper before and since then)

The exhibition is entitled ‘Sacred Landfill’ and mixes a certain irreverence with sombre, yet at times, other-worldly landscapes. There is also somewhat of an ecological theme, as well as a suggestion of psychological ‘projections’ that we humans can have a tendency to create and impose upon the world.

They are not so much views but rather fragments of land and disparate characters, arranged over the picture’s surface. The aspect of fragments also slightly mirrors our mind’s tendency to fragment thought, and so the landscapes could be seen partly as a metaphor for mind. Although ‘The Wild West’ and Hollywood have been of some influence, and make a slight, incongruous  appearance in the imagery, the work is fundamentally a romantic look at the layered landscapes of the U.K, and how it can vary suddenly from fairly mundane, semi-industrial wasteland to the sublime. They may be wastelands but the land is alive, and also,  just as the landscapes of the U.K can be layered with history there have been a lot of ideas and little meanings that layer the paintings.