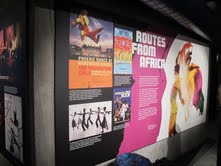 A new exhibition looking at the experiences of Black British dancers over six decades will take place at the International Slavery Museum.

This exhibition explores the experiences of Black British dancers from 1946 to 2005 and highlights their contributions to British dance.

It will look at the origin of a variety of dance forms such as jazz, contemporary, ballet, hip-hop and African People’s Dance. Many of these styles arrived in the UK through varied routes taken by ancestors of today’s Black British citizens.

As well as studying dance forms, British Dance: Black Routes will also look at dance groups and feature the relatively untold story of Elroy Josephz. Despite being a trailblazer, his name is largely absent from the mainstream history of British Dance.

Elroy was a dancer, teacher, actor and producer who came to Britain from Jamaica in the 1950s. He performed on stage in the West End and appeared on TV in West Side Story and Doctor Who. He toured his own dance company internationally developing his own style of dance which fused African Caribbean forms with those of Europe and Asia.

He would later teach dance students in Liverpool and London before becoming one of the UK’s first Black dance lecturers in 1979 at what is now Liverpool John Moores University.

To mark the opening of the exhibition a free panel discussion will take place at 14.00 on Thursday 12 September at the International Slavery Museum. The event will explore the creativity and achievement of Black dancers and choreographers past and present.

Dr Richard Benjamin, Head of the International Slavery Museum, said: “We are very excited to tell the story of Black British dancers. Some of these dance and music forms travelled along the transatlantic slave trading routes from Africa to the Americas and the Caribbean on their way to Britain.

“Dancing has a much deeper meaning for Black Britons. Enslaved Africans kept alive their cultural traditions through music and dance. Black people have continued to use and reinvent these forms to retain and express identity. When Black Britons have suffered from racism, dancing has offered a powerful means for affirming positive ways of being Black.

“We are delighted to be highlighting Elroy Josephz. Despite playing a central role in changing how modern dance is taught and performed, Elroy’s story is largely absent from the history of British Dance.

“Central to Elroy’s work was his understanding of the historical importance of transatlantic slavery and its legacies. He felt this history gave his work a power and emotion essential for his style of dance.”

The exhibition will study how different dances vary but have qualities in common such as multiple rhythms, and high energy presented in a cool way.

This exhibition was developed by De Montfort University and York St John University. It has been funded by the Arts and Humanites Research Council.

A symposium event linked to the exhibition will take place at the Museum on Friday 25 October from 11.00 – 17.30. More details will be available nearer the time.

There will also be several dance related events in October during Black History Month.

Photoblog: Spring on the Waterfront 2011.