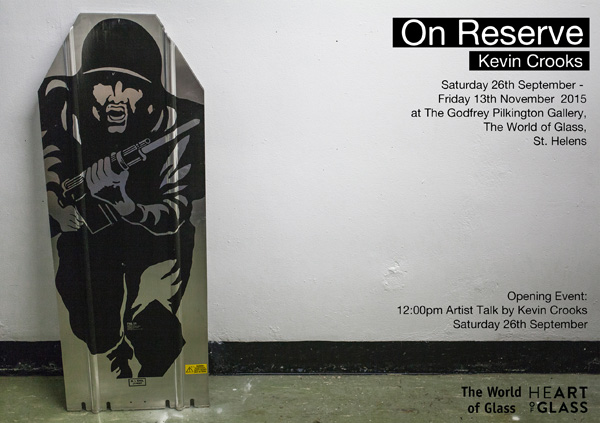 Kevin Crooks is a local artist who has spent the past year talking to part time soldiers from North West Army Reserve units, documenting aspects of their lives through photos, interviews and film.

His work ‘On Reserve’ consists of photographic, video and sound installations documenting the stories of Reservists based in North West England and exploring their opinions on recent conflicts, how they believe they are perceived and what they think the future holds for recent and prospective Army Reserve recruits.

The Army Reserve (previously known as The Territorial Army) has undergone a national re-structure and re-branding since the formation of the Coalition Government in 2010. The current UK Government is now looking to increase the number of Voluntary Army Reservists from its current level of 21,000 to 30,000 by 2020.

This policy was introduced alongside the Government’s intention to reduce the numbers of “regular” full-time soldiers from its 2010 level of 102,000 to 82,000 by 2020. In fact the Government achieved this reduction target in 2015.

The project and exhibition has been supported by the Heart of Glass a new commissioning body which is supported by the Creative People and Places programme which was initiated by Arts Council England, more details can be found here: http://www.heartofglass.org.uk/about/
Information about the project can also be found by following this link, the webpage allows users to book and reserve free tickets for the opening event:
http://www.heartofglass.org.uk/events/on-reserve/