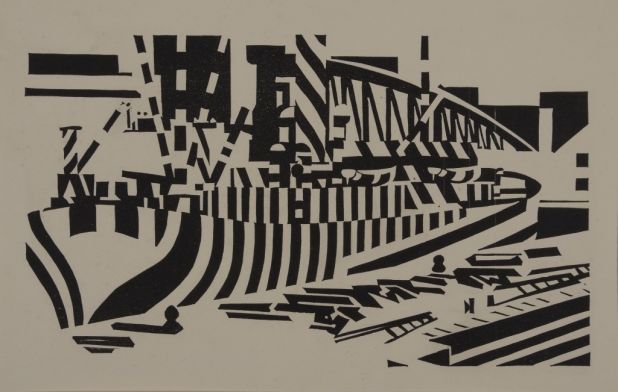 This display of four ‘dazzle ship’ prints shows the work of Edward Wadsworth, an Intelligence Officer for the Royal Naval Volunteer Reserve during World War I.

The concept of ‘dazzle camouflage’ was developed by British artist Norman Wilkinson (1878-1971) in 1917. His idea was to use brightly coloured, asymmetric patterns to create optical illusions that, when painted on boats, would obscure their speed and direction. This would make them difficult for the enemy to target. These ‘dazzle’ designs were applied to merchant and troop ships for the remainder of World War I.

Under Wadsworth’s supervision, over two thousand British ships were painted in ‘dazzle camouflage’ in Bristol and Liverpool. This experience inspired him to produce the series of woodcut prints that are now part of the Walker’s collections.

This display coincides with Carlos Cruz-Diez’s ‘Dazzle Ship‘, which can be seen on Liverpool’s waterfront.