Home View Two: Over the Sofa – Paintings by Annette Dunn 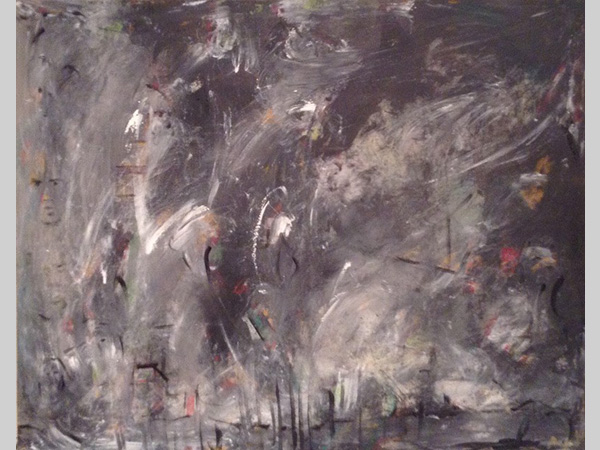 A Liverpool artist who creates stunning contemporary paintings using emulsion paints bought from B & Q is holding her first ever solo exhibition in the city.

Annette Dunn from Allerton already has paintings featured on the respected Saatchi Gallery’s on-line site, as well as sculptures at the Chelsea based Walton Fine Arts Gallery.
But she is assembling the biggest ever collection of her works for her debut solo exhibition at Liverpool’s View Two Gallery at 23 Mathew Street.
Her show opens with a viewing event on Thursday evening (7 Jan) , with the exhibition opening Friday (8 Jan) at noon.

Annette’s painting talents first emerged as a teenager at school in Huyton. But she left school without any qualifications, later discovering she was dyslectic, and her talents unfilled.
In her 20s she enrolled on an art foundation course at Liverpool’s Mabel Fletcher College, studying at the same time to gain a clutch of ‘O’ and ‘A’ levels she had missed out on at school.

Annette more or less put art onto the back-burner, after gaining degrees and diplomas from both Liverpool John Moores University and the University of Liverpool. That led to a career in nursing and then social work. Her interest in painting was rekindled when her mum Jane was terminally ill.
“My mum always knew I had this love for art and it was her dying wish that I should take up painting. So I decided to fulfil mum’s wish and I have been painting and creating sculptures ever since.”

Inspired by Picasso, Dali, Jasper Johns, and Jackson Pollock, Annette describes her paintings as eclectic. Often events such as the weather will inspire a piece of work, or a major event or happening.
She says: “I am interested in abstract expressionism and post war art. My work reflects social and environmental issues, like climate change and women’s issues. I apply different styles to my work. For me the use of colour, form and emotional content is of the upmost importance to be conveyed to the viewer. With a blank canvas, inspiration, emotion, passion and hard work, the end product is formed.”

As well as those emulsion paints, Annette also uses acrylics and water colours.
“I hit on the idea of using everyday household paint to create striking what I call ‘over-the-sofa’ paintings. These look great against a plain wall in the home,” said Annette.
For a while Annette was based at the ‘old’ Bluecoat in what was called the Tyson Smith studio. There she gained inspiration from artist Terry Mc Gunicle and sculptor Terry McDermott. She now works from her Allerton home or in a studio in Duke Street.

The Annette Dunn New Exhibition runs from January 8 until February 6 2016 at View Two, 23 Mathew Street, Liverpool L2 6RE. Gallery open Fridays and Saturdays 12.00 until 17.00 and at other times by appointment.