Home The Trophy Room: Watch in a bright room and at a safe distance from the TV

The Trophy Room: Watch in a bright room and at a safe distance from the TV 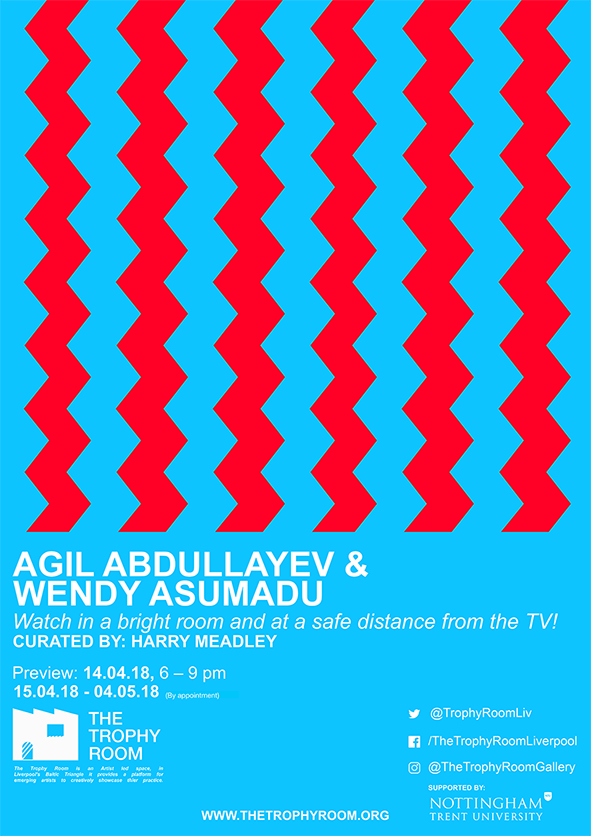 The Trophy Room: Watch in a bright room and at a safe distance from the TV

Watch in a bright room and at a safe distance from the TV!
Agil Abdullayev & Wendy Asumadu
Curated by Harry Meadley

In 1997 an episode of Pokémon was televised in Japan which featured rapid flickering red and blue frames which caused hundreds of children to have seizures, and in some cases epileptic fits. 685 were hospitalised. The phenomenon was widely known as Pokémon Shock. Though the footage itself was partly to blame for this, it was also exacerbated by the fact many were watching the episode close to their screens in dark rooms thus intensifying the strobing effect. Following this event, many animes, and some still to this day, display a message at the start which reads:

Watch in a bright room and at a safe distance from the TV!

In considering the accessibility and advantage that internet based video platforms offer to artists working in digital video in order to share their work; what is often overlooked is the sometimes un-ideal, and arguably unhealthy, setting in which such things are then being watched: on a laptop in bed, on an office computer, on a mobile phone… putting eye strain aside, what is common with these scenarios is that it is usually either being done alone, surrounded by distractions, or lost amongst a barrage of content.

This exhibition, which will follow its titular instruction, simply seeks to present new video works by both Agil Abdullayev and Wendy Asumadu in a clear, concentrated  environment.

My practice attempts to examine the contrasts between the East and the West, related to the subjects such as femininity and masculinity, public life and private life, human rights and politics, and bridging the spaces between these subjects.

Politics doesn’t seem to escape people like me. Every artist like me is political, in one form or another. Politics have defined our lives, as a queer man living in Azerbaijan, facing censorship, harassment, arrest or torture. Although while I live outside my hometown, Azerbaijan and experiencing the pain of the separation from my family and loved ones, only in the West I have a privilege of being free to inspire, to provoke, to mobilize, and to bring hope to my people. I took a position of the reporter of my people and communicators to the outside world. Art has become my own luxury to tell the truth.

I work with a variety of materials to fabricate my ideas, centred at moving image through filming in green screen and using pop culture gifs and social media aesthetics, I exhibit my works in single or multiple channel video installation.

Predominantly working in video, photography and text, my practice explores the journey to personal authenticity, what it means to be yourself and for me, an artist. I’m interested in how we can explore elements of our identity, upbringing and experiences, to determine whether it is truly who we are, or a construct of society.

My works usually derives from my own personal experience and are a manifestation of my memories and reality. However, I aim for the narrative to extend and connect to a wider audience. In some works, I’ve focused on my family’s native language and my inability to speak it. I attempt to speak it with the help of my mother but I also question the importance of learning it since I was born, raised in London and all that I really know is London. Do I want to learn it because my parents say so or because I want to? What is important for me as an authentic individual? And how do we determine this?

I like to use other people in my work, have conversations and discuss how experiences they’ve had, has constructed or is constructing their authentic being.

By having these conversations, I aim to put simply put some feelers out there for the audience to interpret themselves.

‘Wendy and Agil make super good work. It deserves attention and I’m very honoured to have had the chance to consider how to present it – that is to say, to just let the work speak for itself. I’m sure I’m slightly biased in picking them as they both share similar interests to me in the use of monologue and conversation as a mode of expression and examination. Doing so, however, always comes from a unique and individual place; and it is in the sharing of our experiences that often brings us all closer together.

I was also only supposed to pick one artist but got greedy and wanted these two – as much as their works utilise speech, prompt conversation, and have something important to say, I wanted to hear how the works talk to each other as well.’

Harry Meadley is an artist born and based in Leeds and was recently an artist-in-residence at ISCP (International Studio & Curatorial Programme), New York. He is a Liverpool Biennial Associate Artist and in 2017 presented the eight episode video work On the Bench commissioned by Up Projects for The Floating Cinema which toured the waterways of South and East Yorkshire, and North Lincolnshire in partnership with Hull City of Culture. He has exhibited at Eastside Projects, Birmingham; Northern Gallery of Contemporary Art, Sunderland; David Dale Gallery, Glasgow; Annet Gelink Gallery, Amsterdam, amongst others; and performed at Bluecoat, Liverpool, and Jerwood Space, London.