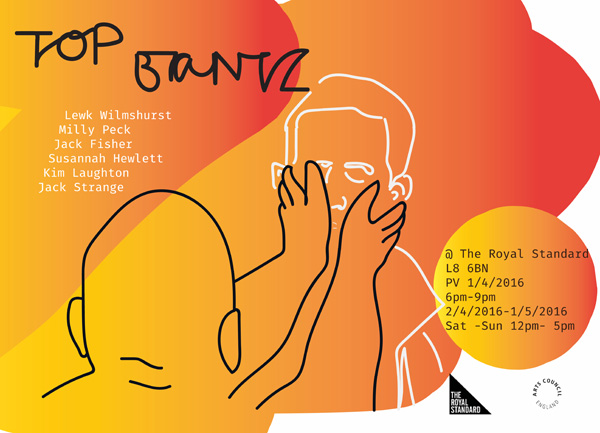 the playful and friendly exchange of teasing remarks.

“there was much good-natured banter”

“the men bantered with the waitresses”

Laughter might have once been seen as taboo in the gallery space, but the values of institutions are changing. The exchange between artist and viewer has become a playful interaction where the cultural grey areas are blurred to create new categories. Artists (or comedians) are frequently opting to make work by using strategies borrowed from stand-up comedy, television and game shows – Is this the humour renaissance, or the end of the (art) world?

“the whole idea of seriousness is awful to me, it sounds like something imposed from without, it doesn’t really imply gravity or profundity, it implies decorum, behaving yourself, and that’s what i don’t like about it.” Charles Ludlam (1998)

In this context is it possible that critically engaged work can poke fun at itself? Can an exhibition deal with seriousness and banter, together? TOP BANTZ aims to explore the paradoxes that humour and art present by engaging audiences with amusement, rather than sincerity. The exhibition will ask the questions; Can artists invest heavily in a project and yet be nonchalant? Is it possible to commit to a cause with anything other than earnestness? Does having TOP BANTZ void all critical discourse?

Susannah Hewlett is an artist and performer working in live art, comedy, theatre, sound and video. She has performed and screened work for Barbican, Tate, Live Art UK, Loco Comedy Film Festival and at various events in New York. She is an associate artist for queer performance collective Duckie. She’s interested in the scarier stuff in popular culture and explores these in videos & site specific shows including the cult comedy horror in a caravan Barbara and Yogashwara’s Safe Space and live edited soap opera The Erinsborough Fringe. Her alter-ego is VSS Shopping Channel host Chris Titmas through whose eyes she gets to see some horrible stuff.

Lewk Wilmshurst (b.1987, Oxford) is currently completing his Masters in Print at the Royal College of Art having graduated from The Bath School of Art and Design, in 2010. Latest shows include ‘Beacons’ at The Scottish National Gallery with MadeScapes^, Edinburgh, 2015, winner of ‘Neo: Print Prize’, Bolton, 2014, ‘Spike Island National Open’, Bristol, 2013,

Milly Peck (b.1990, London) is currently completing her Masters in Sculpture at the Royal College of Art having graduated from The Ruskin School of Art, Oxford University, in 2012. Recent shows include ‘Treat Yo Self’ at Bloc Projects, Sheffield, with It’s All Tropical, 2015, ‘Cowley Manor Arts Award’, Gloucestershire, 2015, ‘Flat-Pack’ at The Greenroom, Krakow, 2015 and ‘Screaming Hornets’ at Tintype Gallery, London, 2014.
Jack Fisher (b. 1991, UK) is a maker of moving things and images. Forthcoming Projects include; FBResidency and PublicExhibitions.biz. Past projects and group shows include; S.O.T.D: Year of the Sheep, DVD IS DEAD, …And to Dust All Return; UNNA WAY, Ways of Looking; Hanover Gallery, Cascading Relevant Information; CBS x Open Eye Gallery