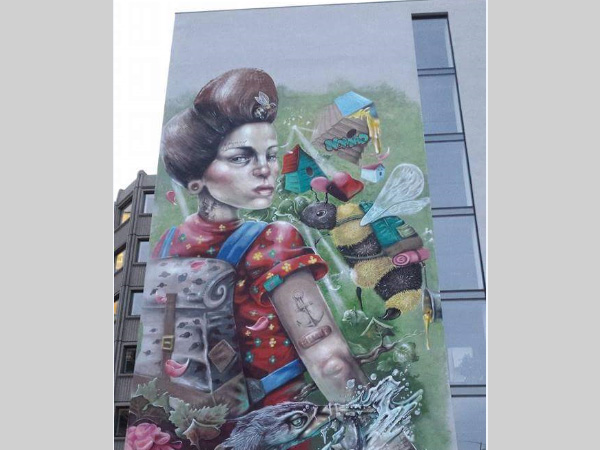 Alongside the unveiling there will also be a POP-UP event, celebrating creatives of the North West and the piece itself, with a short film of the production of the piece, live illustration jam, pop-up stalls with work from local artists and designers, music and drinks.

Capital&Centric has commissioned world-renowned street artists, the Nomad Clan,
to create an original artwork on their building.

It took the all-female street art crew two weeks to complete the mural which covers the entire side of the office building. Graffiti and street art is often criticised as being too masculine and lacking in artistic merit but this enormous mural addresses both of those criticisms.

At over 21m tall, the mural is one of the biggest in the North of England and takes inspiration from the political and local environment. The artwork depicts a female nomadic character complete with literal beehive hairstyle. She is set amid lush vegetation, symbolising new beginnings and the growth of start-up businesses within Liverpool.

The Tempest building has attracted young and creative businesses, something that Capital&Centric has encouraged as a disruptive and creative property developer. The developer has also provided a co-working space on the entire top floor of the building with charity Launch22, this space mentors entrepreneurs with free offices for people from disadvantaged backgrounds.

The artwork features a number of themes, from the image of a poised female nomad entering the city of Liverpool to the bees that represent the beehive of 180,000 bees located on the buildings roof. The developer installed to beehive to assist with the UK’s falling bee count.

Nomad Clan immersed themselves in the challenge, saying
“We are extremely proud of what we’ve produced and hope the people of Liverpool like the mural as much as we’ve enjoyed producing it, in our signature Nomad Clan style. It has a playful nod to the beehives on the Tempest building and city with the Liver Bird and sea holly; which is Liverpool’s native flower emblem”

Adam Higgins, co founder of Capital&Centric said:
“We spent the past year renovating this derelict building in Liverpool to become a focus for innovative and creative new business; the artwork is the finishing touch by using the building as a canvas for everyone to appreciate.”