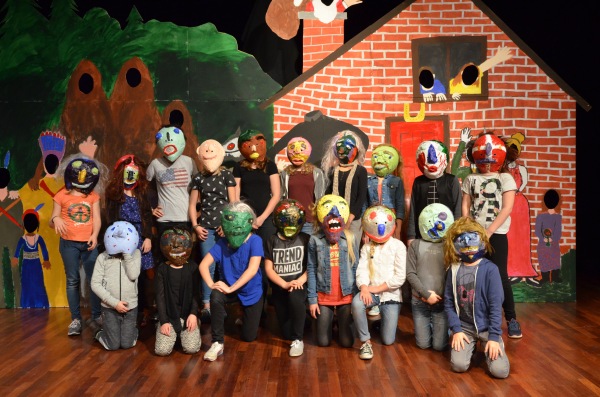 Supported by the Creative Europe Programme of the European Union, as part of Collaborative Arts Partnership Programme, Super Slow Way, Liverpool City Council and Tate Liverpool Corporate Members and Patrons
Visitors to Tate Liverpool will have the unique opportunity to witness the production of a musical unfold live in the gallery over the space of four weeks, culminating in three special performances.

Berlin based artist Christopher Kline (b.1982, United States) is working with communities from Lancashire and Liverpool to produce O.K. – The Musical. Usually the home of internationally recognised artists including Picasso, Warhol and Turner the gallery spaces will be transformed into a working set where visitors can drop-in throughout the day and watch continuous activity, getting a glimpse of what goes on backstage.  From acting, singing and playing an instrument to set design, lighting, and prop-making people of all ages and backgrounds will contribute and work together.

O.K. – The Musical explores and restages the entire history and folklore of Kline’s hometown of Kinderhook in New York State with an original score by the artist.  Work has already started with the artist meeting groups in community centres to develop their role in the theatre production, using their own experiences to influence the narrative and final performances. Their collaboration will continue at Tate Liverpool from 1 April – 1 May 2017.

Christopher Kline said: ‘OK – The Musical is an evolving play where scenes are added or refined for every staging as the stories are told and retold. In this way everyone involved has something meaningful to contribute through their ideas, acting, singing and making. Connecting communities in Liverpool and Lancashire enriches the project, by forming new personal relationships, sharing stories and collaboratively producing a musical while finding new ways of exploring and narrating their own local histories.’

To connect people within the North West region Christopher Kline and Tate Liverpool have collaborated with Super Slow Way, a regional arts organisation that works with community groups in Pennine Lancashire. This year Super Slow Way are delivering an ambitious programme comprised of local, national and international artists in a series of commissioned and community-based residencies. Recent projects include a commission by internationally acclaimed artist Suzanne Lacy (b. 1945) who conducted a mass participation project with the diverse communities of Pendle, Lancashire.  The resulting film will also be shown at Tate Liverpool, as part of Tate Exchange in 2017.  Tate Exchange Liverpool is an ongoing project that invites the public to come together with organisations from across the North West and international artists to collaborate, test ideas and discover new perspectives on life, through art.

O.K. – The Musical is part of an annual season of commissions entitled We Have your Art Gallery the first of which was Art Gym, a successful three week programme of activity devised and delivered by young people in spring 2016. We Have Your Art Gallery is an experimental and developing project that reimagines what a museum can be and how it can programme for and with the public.