Home The Tapestry: On Site: The Plasterer (The Dead Pigeon Gallery)

The Tapestry: On Site: The Plasterer (The Dead Pigeon Gallery) 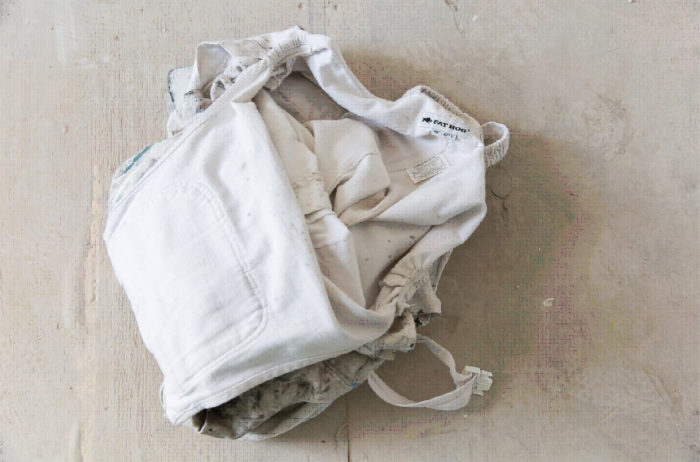 The Tapestry: On Site: The Plasterer (The Dead Pigeon Gallery)

Coming Home, a project set up by Ronnie Hughes working together with Jayne Lawless to research and develop ways to address the issue of empty properties falling into disrepair is looking back over the past year with an art exhibition inspired by photographs taken during the refurb of a home in Walton they managed and tenanted.

As the company carried out work on its first house, photographer Jane MacNeil documented the contractors at work. Her photographs of Penny Lane Builders and specifically the plasterers caught the attention of Jayne who decided to use them as a starting point for new work and invited other creatives into the process to do the same, with ‘an eye on an exhibition somewhere down the line.’

This led to meeting Jason Abbott through finding a gallery space, which will be known for this week as The Dead Pigeon Gallery. The name derived from to the sheer number of dead birds found in the abandoned parts of the building – a homage to the much unloved city birds.

The space, originally a printers set up by Jason Abbott’s Father in the 60’s has just begun a major refurbishment and is currently a building site, which also resonated with the Coming Home project.

All welcome to the launch of this exhibition of work by some of Liverpool’s most exciting local artists, past and present.

Catherine Dalton
Catherine’s response to the exhibition brief was the idea of making something for the home. Being a mature BA (Hons) Design student creating something combining both material and print appealed to her, and curtains seemed the natural choice. The curtains have been hand printed using a lino cut inspired by Jane MacNeil’s photographs.

Adrian Henri
Henri came to prominence as a writer alongside Roger McGough and Brian Patten in the groundbreaking and irreverently contemporary Penguin anthology The Mersey Sound (1967), one of the best-selling poetry books of all time (over a quarter of a million copies to date). He went on to publish numerous poetry collections for adults and children. He was also a playwright, novelist and librettist.

Jason Hollis
UK based mural artist Jason Hollis is interested in redeveloping the graffiti medium through a body of work with a clean yet abstract graphic style. Influenced by geometric structures both natural and man-made; Crystal formations or scaffolding wrapped buildings then become key elements of his visual vocabulary.

Josie Jenkins
Josie Jenkins is an award winning artist based in Liverpool, UK. She studied for her BA Hons in Fine Art (Painting) at Norwich School of Art and Design, UK, graduating in 2002 and has since exhibited in the UK and internationally.

Patrick Kirk-Smith
Director of Art in Liverpool C.I.C. and editor of www.artinliverpool.com. His work as an artist has always focussed on communication, and recently in exploring the boundaries between critical and creative practice, and the value different communities put on each.

Andrea Ku
Andrea Ku is a Landscape Architect with a focus on urban biodiversity. She not only design spaces but works with individuals to build them and teach the use of the landscape in relation to surveys, habitats, conservation and food growing.

Jayne Lawless
Jayne’s practice continues to highlight the diversity of her work. Heavily influenced by travels to Mexico and Cyprus, and social housing issues at home and abroad, her immediate concerns focus on form, space, construction and architecture.

Colette Lilley
Colette Lilley is a practicing visual artist based in Liverpool. She has exhibited throughout the country, and has also worked on a number of projects, including the Tate Modern project From Morning till Night, Katherina Sede. Colette has also featured on Axis’ Spotlight, as one of five artists to watch during Liverpool’s Biennial.

Deborah Morgan
Liverpool based Writer and graduate of the Everyman & Playhouse Playwrights’ Programme. In 2013, her first script, Endlessly Dead, was longlisted for the BBC’s Alfred Bradley Award. In May 2016, Deborah was commissioned to write a ten minute piece for the Everyman and Playhouse Theatres Everyword Festival.

Erika Rushton
Erika Rushton is co-founder of the Beautiful Ideas Company, Chair of the Board at Baltic Creative and Chair of Granby Four Streets CLT.