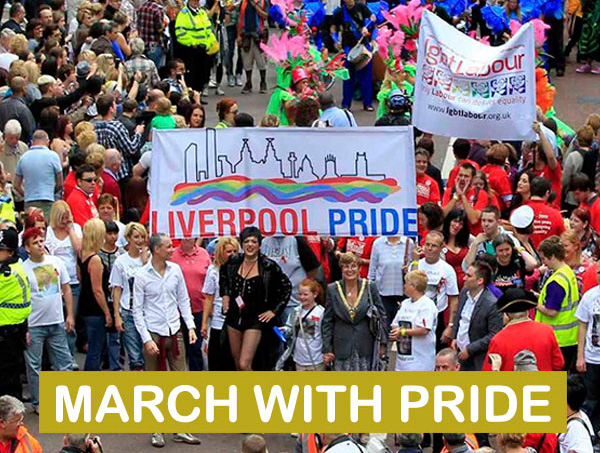 Organisers of Liverpool Pride Festival 2016 revealed their full programme of entertainment for the main Festival day on Saturday, 30 July 2016 which runs across three stages.

Taking up its new position in the St George’s Quarter, from 1pm to 9pm, The Festival will host a full day of entertainment – with something for everyone whether its great music or classic burlesque that floats your boat. There will also be drag queens, comedy, dance, choirs, swing and all that jazz!

Parade Details:
Meet at the Festival Stage on William Brown Street
Saturday 30 July 2016
Arrive from 10:30am – 11:40am to take part.
12pm start.
March finishes at St George’s Hall 1pm.
FREE! The March is free to everyone!

We’ve never stopped loving her and headlining the main Festival Stage will be Liverpool’s very own queen of pop Sonia! She will be joined by X Factor bad boy Mason Noise who will be whipping the crowd into a frenzy and also former X Factor contestant Lucy Spraggan with her own brand of original songs blending a mixture of acoustic, folk and hip hop with her heartfelt lyrics and quirky sense of humour. Eurovision’s Karl William Lund and Welsh singer songwriter Christopher Haul also perform the main stage.

For the first time, Liverpool Pride is supported by Awards for All to host a dedicated Find Your Pride Youth Zone. Pride has partnered with GYRO, Brook Wirral and The Action Youth Trans* project to provide a day of support and activities for people under 25.

Head over to St John’s Gardens between 1-6pm and visit the Find Your Pride Marquee – events include content from GYRO and Action Youth, Wirral Brook’s Working It Out, The What’s Our Pride Story writers and the Garden Stage will host a full music programme throughout the day featuring Splintered Uke, Jack Woodward, Anthony O’Sullivan and Eleanor Nelly.

The YPAS Building by GYRO and Action Youth offers a safe space to ensure all LGBT+ young people have somewhere to go to think and be themselves in a supported environment. There will be workshops and social events throughout the day.

Throughout the day, the St George’s Quarter will come alive with the sound of music from Batala Mersey –Samba Reggae Drumming Band and the Ukulele Club.

And if all this entertainment makes you thirsty, head to the Champagne Bar for a well-deserved glass of fizz or a cocktail or two at the Plateau Beach Bar. And for a bite to eat, head to the Food Village and sample the wares of the Artisan Food Traders or try some Themed Street Food!

Lucy Day, Chair of Liverpool Pride Festival, said: “We’re delighted to be working with a wide range of cultural partners and sponsors who have helped us to put together an exciting and different programme of entertainment for this year’s festival, it is now two days and it is absolutely free. This year’s Liverpool Pride festival has something for everyone, it is looking to be the best Pride to date and we look forward to entertaining the crowds.”

Liverpool Pride Festival 2016 offers a week-long programme of activity which culminates with a two-day event on Saturday 30th and Sunday 31st July. It takes place in a new, more prominent position in the St George’s Quarter and features the well-established Liverpool Pride March on the Saturday.

The ‘We Are Family’ day on the Sunday is the latest addition to Liverpool Pride Festival 2016 which creates a festival atmosphere for all the family to enjoy. Other new initiatives for 2016 include LOOK’s Liverpool Icons, a photography exhibition in Liverpool ONE; ‘What’s Your Pride Story’ in partnership with Writing On The Wall;‘Dress With Pride’ to encourage customer facing businesses to dress up during the week of Pride to help raise funds for the Liverpool Pride charity; and ‘Come Out Of The Shadows’, a campaign to see the city’s iconic venues lit in the Pride rainbow colours in a bid to make Liverpool the most visibly LGBT friendly city in the UK, this is supported by the Police Commissioner’s Fund as a Hate Crime initiative.

As always, the festival coincides with the anniversary of murdered gay teenager Michael Causer, who tragically lost his life on 2 August 2008. The Liverpool Pride festival was specifically created in his memory as a way to celebrate his life and to empower the LGBT communities.

Liverpool Pride Festival is now a key highlight in the city’s Summer events programme, attracting more than 25,000 people each year to attend, take part and support the annual LGBT festival.