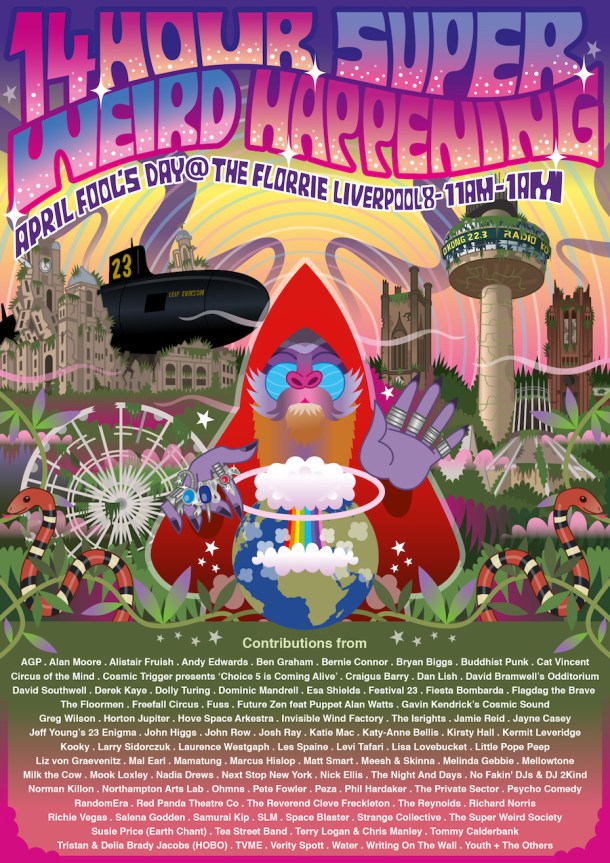 Following on from six previous Happenings, the most recent of which was a magical day at Festival No.6, Greg Wilson’s label, Super Weird Substance are hosting their most intriguing event to date. Unfolding as an all-day festival, which takes over the stunning Grade II listed building, Liverpool’s Florrie, for 14 hours – between 11am-1am – with live music, DJs, exhibitions, live art, spoken word, panel discussions and performance. Restored to its former Victorian glory, The Florrie has already hosted a recent exhibition by seminal punk designer Jamie Reid, whilst welcoming the ADP Riot Tour, courtesy of former KLF provocateur, Jimmy Cauty.

Fifty years on from The 14 Hour Technicolor Dream, a catalytic countercultural event at the Alexandra Palace in London, the Happening hopes to evoke the spirit of ‘67 and its fabled ‘summer of love’. However, whilst tipping a nod to the past, the event will present some of the ideas and concepts from those halcyon days in a manner that illustrates their relevance now as well as then.

The Happening will be a contemporary ‘gathering of the tribes’, bringing together various creative individuals and collectives, both locally and from places including Northampton where Alan Moore has rekindled the town’s Arts Lab, Brighton, home of author John Higgs, The Odditorium and Daisy Eris Campbell – whose heroic Cosmic Trigger Conferestival, held at Liverpool’s Camp & Furnace in 2014, was a key connector in the quest to ‘find the others’ – and Sheffield, where Festival 23 provided last summer’s get-together, the mycelium network spreading ever wider.

With Liverpool being historically fertile ground for counterculture, the event will explore some of the aspects that make up the city’s creative underbelly – the modern mythos surrounding Carl Jung, Mathew Street and the Eric’s era, including the colossal contribution of Roger Eagle, as well as Liverpool’s unique connection with black American music – plus its own, often obscured black music legacy – explored by local archivists Next Stop New York, with contribution from Liverpool hip hop collective No Fakin’.

There will be a room dedicated to local bands and acts, featuring various underground and up-and-coming musicians from the different scenes within Liverpool, whilst the main hall will play host to local heroes, The Tea Street Band plus the label’s own Super Weird Society featuring Kermit Leveridge, The Reynolds and The Reverend Cleve Freckleton, as the evening moves into a full-on party vibe, concluding, as is the way of the Happenings, with a Greg Wilson DJ set.

The event’s main aim is to bring people together in a fun and colourful yet engaging and illuminating environment. The full line-up, listing what’s taking place in the main spaces, plus all the nooks and crannies, will be announced later this month, pre-release tickets are on sale for a limited period at £10 + booking fee.

There will be no fees paid to any of the participants – the goodwill and generosity of the all the artists who’ve been approached has reflected the spirit of the collective – and all proceeds will go to The Florrie, which is constantly in need of funds, surviving largely through the passion of the good people who run it.