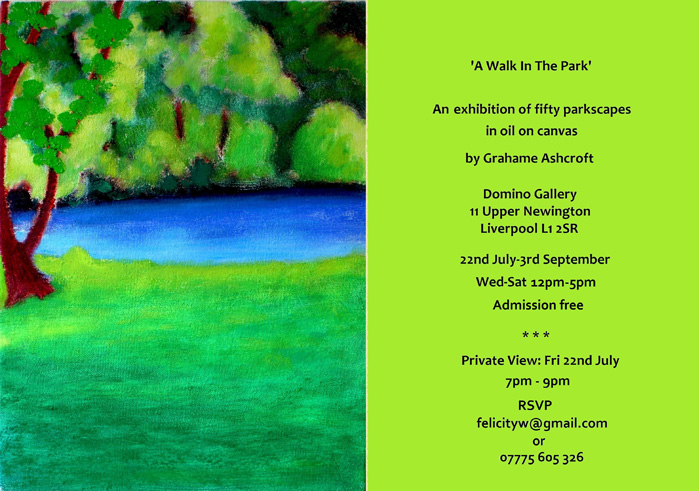 To coincide with the A Walk in the Park exhibition Neil Campbell will perform a solo set of his nine movement solo classical guitar suite Tabula Rasa Suite, a pastoral piece inspired by the sounds of Sefton Park, which was described by The Musician as “a masterful work of simplicity and depth” and which can be listened to (and purchased) at: https://neilcampbell.bandcamp.com/album/tabula-rasa-suite

This solo set will be followed by music from the After the Flood Trio, a new project featuring Neil Campbell (classical guitar), Marty Snape (acoustic guitar) and Roger Gardiner (bass).

After the Flood’s music combines a variety of world music styles such as Indian, African and Celtic music, incorporating polyrhythms, cyclical structures, spirited grooves and improvisations. In a recent review of a concert at Liverpool Philharmonic Hall’s Music Room, Nerve reviewer Ritchie Hunter noted that “the gig was a welcome relief from the nasty politics of the world outside. The vision was of a better world, egalitarian where culture and diversity is welcomed, and you could follow this as the resonating sounds went back and forth, and in the references to classical, Eastern and African music”.
This concert at the Domino Gallery will be the first ever from the trio version of the band.
You can read the full After the Flood review at http://www.catalystmedia.org.uk/reviews/after-the-flood/ and listen to/find out more about After the Flood at https://www.facebook.com/aftertheflood1/?fref=ts