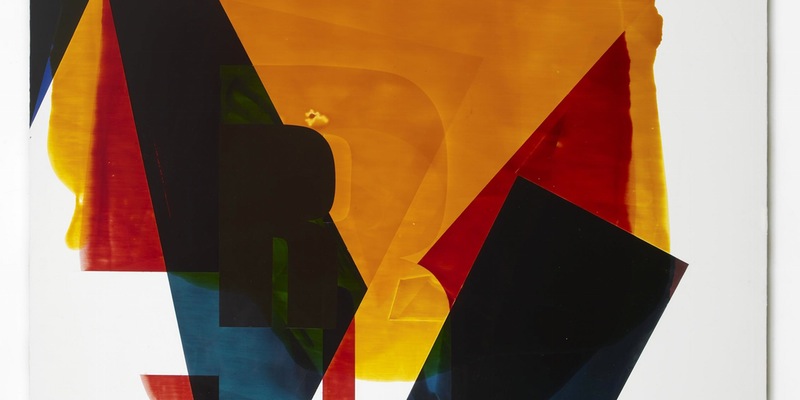 Michael Stubbs’s paintings, which operate at the interface of abstraction and pop, are constructed by combining poured, abstract configurations of transparent varnishes and opaque household paints with ready-made graphic stencils. The repeated pouring, in conjunction with the pop signs, form a physical process of sensual flat-on-flat layering that reveals multiple perspectives and optical depths.

This layering is part of the fracturing process, the breaking up or ‘exploding’ of a recognisable image, a response, says Stubbs, to the ever expanding proliferation of broadcast and internet-based images that fill our world. Amorphous shapes, sharp-edged logos, scything blocks of colour and silky veils of tinted varnish intrude into Stubbs’ picture planes, fragmenting the surface; it is as though the physicality of the works are coming up against the pixilation of the flattened, immaterial space of the digital image.

Yet there is an overriding seductiveness in these works; the perfection of the finish and the boldness of the palette alleviate the chaos of the visual explosion. This is picture making being interrogated in a serious, sensual and often irreverent way. Stubbs critically re-configures the medium in an age of internet information overload.

The exhibition runs from 7 February to 16 March 2017 in The Cornerstone Gallery.