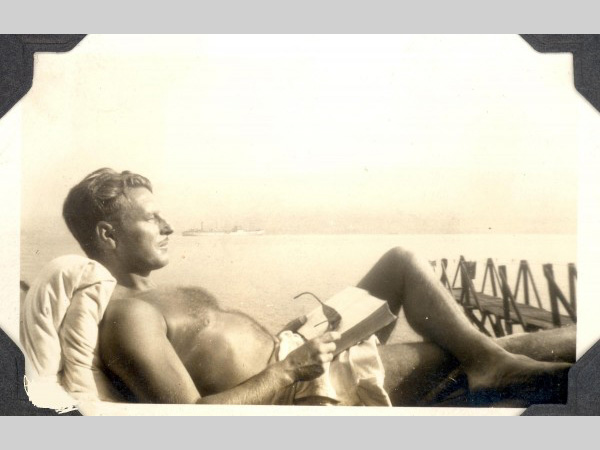 The Lowry Lounge is Bluecoat’s annual celebration of Merseyside writer Malcolm Lowry and has been running since 2009 when the arts centre celebrated the centenary of his birth with a major exhibition, publication, commissions and live programme.

This year’s Lounge starts at 10am with a coach tour of the Wirral and guided walk round Lowry’s childhood haunts, led by artist and local expert Colin Dilnot, who writes the blog Malcolm Lowry @ The 19th Hole. The tour is designed with a focus on the writer’s passion for golf, and will visit several courses.

Back at the Bluecoat, there is a screening at 15.00 of Outward Bound, the atmospheric 1930 film that inspired Lowry, set aboard a crewless boat sailing to an unknown destination and starring Douglas Fairbanks Jr. and Helen Chandler.

This is followed at 17.00 by a special book launch in collaboration with the University of Ottawa Press, Canada. Lowry is known principally for his classic modernist novel Under the Volcano, published in 1947. However he wrote an earlier, unpublished version of the book in 1940. Often regarded as little more than a blueprint — a tentative one at best — for his 1947 masterwork, this has never been adequately considered in terms of Lowry’s work that preceded it, nor been fully critically edited on its own terms.

Upon its completion, the earlier version was shown by Lowry’s agent to thirteen publishers in New York and then withdrawn. By that time, Lowry was already working on the 1947 version for which he became internationally renowned.

The 1940 Under the Volcano by Malcolm Lowry: A Critical Edition is edited and introduced by Miguel Mota and Paul Tiessen, with annotations by Chris Ackerley and David Large and a foreword by Vik Doyen and Patrick A. McCarthy. The book is a bridge between Lowry’s 1930s fiction (especially In Ballast to the White Sea, which was launched at Bluecoat’s 2014 Lowry Lounge) and the 1947 Under the Volcano itself.