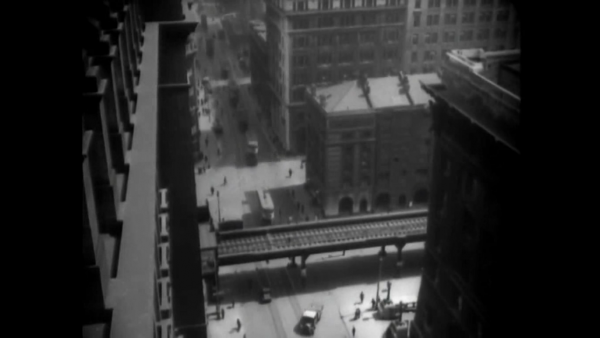 Join us for a special screening of the 1929 film A Day in Liverpool with a live score performed by composer and songwriter Aidan Smith with accompaniment.

This special event sees a dormant classic revived with a brand new soundtrack, composed and recorded especially for its 90 th birthday. A Day in Liverpool (1929) is one of the earliest examples ofthe city symphony genre of documentary art in which the city plays the central role. The film is avisually captivating silent classic by Anson Dyer, “a major figure in British animation for over thirty years, from the First World War to the aftermath of the Second.” (BFI)

The film captures many aspects of Liverpool in 1929, from the thriving industry of the docks, the overhead railway and tram systems, to the stone masons working on the construction of the Anglican Cathedral. Aidan Smith will be performing his score with a live band, bringing this beautiful film to life with a composition that evokes the city’s global outlook as well as the director’s playful eye for detail.

The event will also include a performance of Tracks, a new work for string ensemble by composer Luke Moore. The piece is a musical recollection of the Liverpool Overhead Railway, which served the city’s waterfront from 1893 until its closure in 1956.  The performance features a CGI rendering of the railway in operation by 3D artist Steven Wheeler, footage by the Lumière Brothers shot from the railway in 1897, and newly filmed material.  Tracks has been composed especially for this event and will be performed by music and arts collaboration collective Operation Lightfoot.

After teenage training in Salfordian swing and brass bands, at 23 Aidan Smith signed to Manchester’s Twisted Nerve Records and recorded for the label several well received, self-recorded and mini-albums of idiosyncratic indie pop. He has since recorded full-length albums for three other independent labels whilst touring the U.K. and in Europe. He has also scored a number of short films including ‘It’s Nick’s Birthday’, an eccentric lo-fi super-8 musical. As a multi-instrumentalist he has also performed live in bands whose genres and influences range from live rap to ragtime. His recent new score for A Day in Liverpool (1929) is his longest soundtrack venture to date.

Luke Moore is a professional composer, arranger & multi-instrumentalist based in Liverpool.  Recent work includes Above Us Only Stars, a multidisciplinary performance piece commissioned for the European Week of Astronomy & Space Science, and an original soundtrack to George Méliès seminal science-fiction film, A Trip to the Moon.  In 2013, Luke founded Operation Lightfoot as a platform for collaborations with guest singer-songwriters, musicians & producers.  The project has since expanded to incorporate elements of visual art, dance, film, poetry & theatre for larger scale performances.  Operation Lightfoot recently released Trans-Siberian, their latest single written in collaboration with Berlin born electronic artist Dorothy Bird.