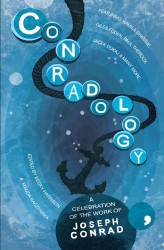 Polish-British Joseph Conrad is regarded as one of the greatest novelists to write in the English language. To celebrate his work, as well as his profound understanding of ever-current issues (from imperialism through to state sponsored terrorism), Conradology brings together specially commissioned short stories and essays, written in English or Polish (the latter being translated into English), which celebrate, respond to and critique the literary legacy of Joseph Conrad.

Including some of Britain and Poland’s most revered authors and critics, this collection will explore Conrad’s enduring relevance in both countries, bringing together the themes that shaped his own life and work – the sea, colonialism, war, travel – in conceptual essays, near futuristic tales, and new journeys through the heart of darkness, cementing Conrad’s reputation as a ‘true citizen of the world’.

Grazyna Plebanek was born in Warsaw, Poland. She is the author of the highly acclaimed and bestselling novels Pude?ko ze szpilkami (‘Box of Stilettos’, 2002), Dziewczyny z Portofino (‘Girls from Portofino’, 2005) and Przystupa (‘A Girl Called Przystupa’, 2007). Plebanek’s latest novel Illegal Liaisons (Nielegalne zwi?zki, 2010) sold 27,000 copies in Poland and is her first novel translated into English. Illegal Liaisons was published in the US in 2013 by New Europe Books, distributed by Random House.

In 2011 Plebanek was awarded the Literary Prize Zlote Sowy for her contribution to promoting Poland abroad. Plebanek is among a group of international artists whose portraits will be exhibited in Brussels Gare del’Ouest for the next 10 years. She lives in Brussels, Belgium.

Wojciech Orlinski was born in Warsaw, Poland. He trained as a chemist but has devoted most of his professional life to writing about science fiction, as a journalist, writer, and blogger. Since 1997, he is a regular columnist for Gazeta Wyborcza. He has published science fiction stories and opinion pieces in Nowa Fantastyka, and his books include What Are Sepulki? All About Lem (2010) and America Does Not Exist (2010).

Sarah Schofield’s prizes include the Writers Inc Short Story Competition and the Calderdale Short Story Competition. She was shortlisted for the Bridport Prize in 2010 and was runner up in The Guardian Travel Writing Competition, and currently teaches Creative Writing at Edge Hill University. Her stories have appeared in several Comma Press anthologies: Lemistry, Bio-Punk, Beta-Life, Spindles, and Thought X. She is currently working on her first collection.

Professor Robert Hampson FEA, FRSA was Professor of Modern Literature at Royal Holloway, University of London, from 2000 to 2016. He was educated at King’s College, London, and the University of Toronto. He is currently Distinguished Teaching and Research Fellow – and Director of the MA in Creative Writing – at Royal Holloway. Professor Hampson has an international reputation as a Conrad scholar and critic. His books on Conrad include Joseph Conrad: Betrayal and Identity, Cross-Cultural Encounters in Joseph Conrad’s Malay Fiction and Conrad’s Secrets. He has also edited various works by Conrad (‘Heart of Darkness‘, Lord Jim and Victory) and was the editor of The Conradian. He has recently co-edited Conrad and Language (Edinburgh, 2016) with Katherine Baxter. In January 2015, he was elected Chair of the Joseph Conrad Society (UK).

Supported by the Polish Cultural Institute and Merseyside Polonia.